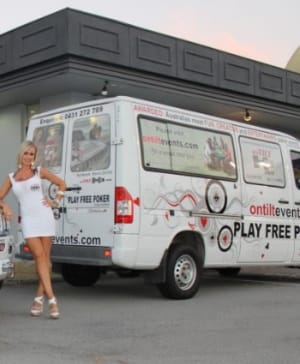 The ad watchdog has hit out at local online poker company Ontilt Events for one of its vans that showed an "offensive" image of a topless woman, marking the third vehicle ad the Advertising Standards Bureau (ASB) has chastised in a week.

The large graphic appeared on an Ontilt Events-branded van and showed a topless woman whose chest was partly covered with the text "WA's sexiest party poker dealers". The van was one in a series aiming to promote company's services.

This ruling marks the third time this week a vehicle has been slammed by the watchdog. This week, camper van hire company Wicked Campers was forced to alter two of its vans' slogans on the grounds of "obscene" language and racial and sexual "vilification".

One consumer told the ASB: "The company has stated that naked dealers available at the bottom of the photo.

"I found the photo offensive due to the naked lady and the size of the picture. I also had my young son in my car."

The company refuted the complaintants argument, telling the watchdog: "The complaint is untrue as you can see nowhere have we mentioned naked dealers are available."

"We are a family run small business that runs a very successful community based events company and cater to a lot of hens and bucks parties as well; hence the advert on the back," it said.

The ASB claimed that despite the woman's nipples being covered, the rest of her breasts were clearly visible. It deemed pose of the woman to be "sexualised", and when coupled with the text, the image was inappropriate for its potential audience.

Following this, the watchdog ruled the van to be a breach of the Section 2.4 of the Code as it did not treat sex and nudity with sensitivity.

Ontilt Events has since complied with the finding and removed the decal from its vans.