Sir Martin Sorrell: The future of agency relations is the one-stop shop 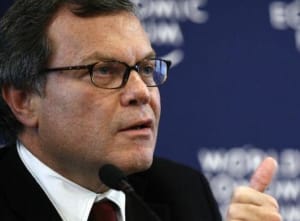 WPP boss Sir Martin Sorrell has told AdNews the best way for clients to deal with agency partners  is through the creation of one-stop shop units with multiple agency touch points.

Speaking before a sold-out crowd this morning in Sydney, at an event hosted by The Growth Faculty, Sorrell was adamant that “horizontality” was key to the success of his holding group. He defined horizontality as the ability for different units within the holding group to work together.

Sorrell said clients can achieve maximum “efficiency and effectiveness” when they create one-stop shop units, where an advertiser's multiple agency partners team together to form a cohesive unit working on a single business.

“I'm talking about creating a separate business as a single operation with one P&L, where the different agency partners are all shareholders,” Sorrell said. “I'm not just talking about a series of operations working in an integrated way.”

He pointed to the launch this week of Team Red Fuse, a team of agency partners under WPP created for Colgate-Palmolive, merging account teams from Y&R, Wunderman, VML, MEC and GHG. Sorrell argued Red Fuse is a completely separate entity which operates as a separate business unit.

He went on to say: “At the moment for clients this is mainly about creating efficiencies, but it will also create effectiveness.”

WPP has created a number of similar business units for its largest clients, including Team Detroit and Team Mazda.

Numerous advertisers in Australia, including Optus, Nestle and Virgin Mobile, have spoken of putting together similar models, but the creation of a separate business entity with its own P&L has not yet occurred to any major extent in Australia.

Nestle marketing boss David Morgan has spoken about the creation of such an entity, while other advertisers, including Optus and Virgin Mobile, have begun briefing their multiple partners as a single unit, but have not created a separate business.

AdNews was the trade partner of this morning's presentation.