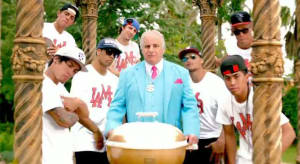 Sam "The Lamb Man" Kekovich steps away from the grill to talk to AdNews about AFL, advertising and BBQ showdowns.

How did you get involved with Meat & Livestock Australia?
Back in 2005, MLA’s agency BMF came up with the idea of getting someone to deliver a no-holds-barred address to the nation, telling people it’s un-Australian to eat anything but lamb on Australia Day. I was doing a TV show called The Fat on the ABC at the time, and they obviously liked what they saw, and approached me.

Are there other brands you could see yourself ‘ambassadoring’ for?
As you would expect for a man of my stature, I get a lot of phone calls every week, asking that very question. I do a few smaller things, here and there, to help out mates and that sort of thing, but I’m very happy being the Lambassador of Australia. It’s a very prestigious role.

Who’s your favourite Australian sporting personality and why?
Apart from myself, I’m good mates with a lot of sporting personalities, so I wouldn’t want to single people out for favouritism in that way. That wouldn’t be very diplambatic. In terms of achievements, however, you do have to admire what Cadel Evans did this year, making history in the Tour de France. That would be right up there in terms of sporting performances by Aussies this year. As would Sammy Stosur’s win at the US Open.

How much creative input do you have in the lamb ads?
I always add my two-cents worth. For example, when we were shooting the first ad in 2005, I suggested we chuck in something about Pommy backpackers. But the actual writing of the scripts is done by DK [Dennis Koutoulogenis] and Jake [Rusznyak] at BMF, which is why you see their name on the credits in all those award shows. They’re riding off my coat-tails to success, I always tell them. Though having spent a lot of time with them over the years, including in freezing cold London and being pursued by the police in Paris, we’re pretty in tune with each other.

How often do people recognise you in the street?
All the time. I was already pretty well-known in Melbourne, of course, from my footy playing days, but over the past eight years, I’ve become known around Australia for my lamb campaign, and I’m recognised by Aussies all the time. I even had people coming up to me on my Lambassadorial missions in Athens, Rome, Venice Beach, Paris and New York.

What do they say?
Well, I had a driver up in Noosa that referred to me as “Sam the Lamb Man”. I thought that was quite catchy. Though generally, they just say g’day. That’s the great thing about Aussies – we don’t stand on ceremony. Doesn’t matter who you are, we’ll come up to you, shake your hand, and have a chat. It’s fantastic.

How would you compare your media career to your playing career? Which do you prefer?
Well, they were both outstanding. Frankly, I don’t prefer one over the other, I enjoyed both - though my media career hasn’t given me two dodgy knees like footy did, so that’s definitely a bonus. Both allowed me to meet some  very interesting people. For example, Donald Trump and I are mates now, after I met him in his offices in my capacity as Lambassador.

Where does your straight-talking personality come from?
It’s just how I’ve always been, and how I was raised. My parents were migrants, who worked hard to get ahead in this country, so I come from good, no-nonsense stock. I’ve never been a fan of beating around the bush. I prefer to confront issues head on.

How closely does your on-air personality match your off-air personality?
There’s no “on-air” and “off-air” distinction. I’m not putting on a character. What you see is what you get with me.

How much red meat do you eat each week? Favourite lamb recipe?
I love my meat. I get through plenty of lamb and beef each week, and eat it most days. My favourite recipe? I like to keep it simple. There’s nothing better than throwing a few nice, juicy lamb chops on the barbie in my book.

Who would win in a BBQ showdown between you and Sam Neill?
Sam’s a terrific bloke, for a Kiwi, but the barbie is my domain. They might have won the rugby, but I think the recent performances of the New Zealand cricket team give you a good indication about the result of a contest between the two of us.

Plans for Christmas day?
kekovich Family. That’s what Christmas is all about.

What’s your view on the Gold Coast Suns and Greater Western Sydney? Should the AFL be expanding?
I think it’s terrific for our great Australian game to be disseminated as far and wide as possible. But it’s got to be done the right way. The sporting landscape is littered with codes that expanded too quickly, and had clubs fold later on, so it’s important to proceed in a considered fashion, rather than expanding too rapidly.

Who will win the 2012 Premiership?
I think Geelong should be strong again, of course. Collingwood too, though a new coach and a few other issues could be interesting to watch. But there are a few other clubs like Carlton, that I think might be knocking on the door as well.

What makes for an effective ad campaign?
I think the key is to have a strong, simple message, and deliver it in an interesting, engaging way. It doesn’t hurt to have a star like myself delivering the message, either.

How much time do you spend online?
I’m more of a phone person myself. I prefer having a conversation with people. But I do email regularly, of course, and read a lot online. And I do have a Lambassadorial presence on Facebook and in the Twittersphere, as you would expect.

What are you media habits?
I’m as voracious with my media habits as I am with my lamb. I consume all kinds of media, from TV, radio, newspapers, internet. Presenting a sports show and giving speeches all the time, you have to keep up with what’s going on in Australia and around the world.

What does it feel like to become an icon of Australia Day?
This is a wonderful country, and it’s given a lot to me over the years, so it’s a tremendous honour and a privilege to be so closely identified to our national day.

This article originally appeared in the AdNews Annual.