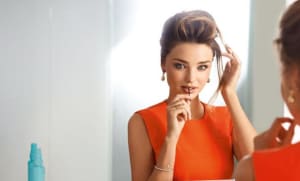 Australian supermodel Miranda Kerr and US reality star Kim Kardashian have been named 2012's most searched-for celebrities on the Bing and Yahoo!7 search platforms.

The respective companies lists' looked at search numbers for Australian and US celebrities, diets, sports stars, news stories and 'How To's'.

Local model Miranda Kerr was revealed as this year's most-searched for Australian celebrity on Bing, followed by country singer and former judge of The Voice Keith Urban. Models Jennifer Hawkins and Megan Gale also made the cut, along with actor Russel Crowe.

Scarlett Johansson, Brad Pitt and John Travolta were commonly searched for on Yahoo7!.

The year's most popular news stories across both platforms included the launch of Apple's iPhone 5, the 2012 US Election, the London Olympics, Hurricane Sandy and the Israeli/Palestinian conflict.

Twilight star Kristen Stewart's fling with Snow White and the Huntsman director Rupert Sanders was also a story of interest for many Yahoo7! users.

The forthcoming "end of the world" on 21 December 2012, as predicted by the Mayans, was also frequently searched throughout the year on the Yahoo!7 platform and has been increasingly searched as the date draws closer.

Meanwhile, the "Most Binged" diets of the year included the Mediterranean diet, the Dunkan diet, the Chocolate diet and the Paleo diet, while "how to make sushi", "how to be a ventriloquist" and "how to make money from home" were the most-searched for general queries.

The platforms' respective data was based on key word searches throughout the year.

Bing is a search engine owned by Microsoft, while Yahoo7! is a 50/50 venture between Seven West Media Group and Yahoo!.