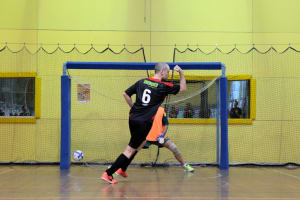 In a bruising five-a-side encounter, with one of the Excite Digital Media team momentarily questioning his ability to reproduce after a particularly robust challenge, the Microsoft media team were on the back foot throughout after conceding an early goal.

Mark Britt, pacing the touchline, looked resigned to defeat when Excite made it two-nil with an audacious lob from well inside their own half with just minutes left on the clock.

But with two minutes to go MMN struck back. Then with nine seconds remaining Barnett displayed deceptively quick feet for a big man, stabbing home from close range after concerted pressure from the home team.

Excite went into the shootout deflated with the MMN keeper standing firm. Sensing glory, Barnett showed bottle to blast home the winner, wheeling away with a pump of the fist. The partisan crowd went wild.

The event, officially titled the UN LTD Cup, raised almost $50,000 for UN LTD beneficiary KidsXpress. The charity will use the funds to provide therapy to children that have suffered trauma, family loss and violence.

Some of the players could probably use a little therapy themselves following a string of hotly-contested matches. Nine, renowned for its aggressive pursuit of the best sporting properties, had three players sent off.  Fairfax players were heard to mutter "we was robbed" upon defeat.

Ikon put in a creditable performance to take third place. Other highlights included the immovable object that was Jason Menzies from team Bing, who fended off several shots at goal by Sydney FC captain Terry McFlynn to win the penalty shootout.

Golden Boot went to Robbie Aoukar from Mediabrands with 9 goals for the day.

Most Valuable Player award went to Adam Tubb from TVN.

'Win or lose, on the booze' was the maxim at the last, with the teams retiring to the Australia Hotel to talk tactics for next year's tournament, which will coincide with the real World Cup in Brasil.