Mi9 and Daily Mail to bring Mail Online to Australia 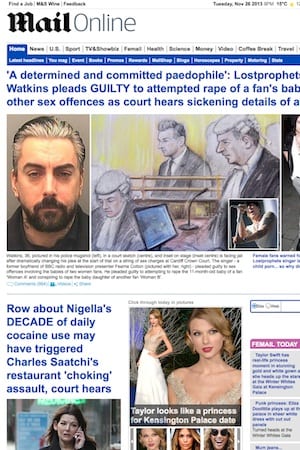 Mi9 has signed a joint venture with UK-based news giant Daily Mail Group to bring the world's largest newspaper website, Mail Online, to Australia. Talks between the two launched some three months ago, although Daily Mail and General Trust (DMGT) proprietor Viscount Rothmere had signalled intent back in May.

The joint venture will be based out of Nine Entertainment Co. and Mi9's offices in Sydney. It will launch in early in 2014, although the company wouldn't be drawn on a specific launch date.

The JV is looking to hire up to 50 Australian journalists and that process has already begun. No Australian editor has yet been appointed.

He wouldn't be drawn on whether this would create further pressure on the paywall strategies of News and Fairfax, but said "it certainly won't do them any favours".

He pointed out that other recent Australian market entrants, such as Buzzfeed and The Guardian, and potential entrant The Huffington Post, "would [unlikely] be putting up a paywall any time soon".

Clarke stressed that the editorial positioning of Mail Online was entirely different to its printed edition in the UK, The Daily Mail.

Asked where it would sit, to the left of News Limited, for example, or right of The Guardian, he said Mail Online did not "edit with an agenda".

"We're not positioning ourselves to the left or right of anyone," Clarke said. "The best headline for me is the one that gets read, not the one that tries to make a point."

He said that its content would be similar to offerings in other markets, largely a tabloid format with a focus on celebrity, would remain the same, but with an Australian focus. While Nine has a lot of programmes and talent to push, Clarke said Nine "would not be expecting any favours... we will treat everybody fairly".

"We will do things differently, we have a robust story telling style. We will not be partisan and we don't have a dog in anyone's fight."

Clarke said that native advertising would have a role to play. Mail Online has "just started" employing native advertising in the UK and would be ramping up more in the US over the coming weeks, said Clarke. "Our view on native is that to make the ad-funded model work you have to do new things. But it has to be transparent, good quality and entertaining. We will definitely be doing it in Australia."

Mail Online is the most-visited newspaper website globally, with 57.3 million monthly unique visitors, according to ComScore.

See the statement below:

The Daily Mail Australia to launch online in 2014
Wednesday, 27 November 2013. Sydney, Australia: Mark Britt, CEO, Mi9 and Martin Clarke, Publisher, MailOnline, Daily Mail Group today announced that Mi9 and the Daily Mail Group have agreed to form a joint venture to bring the Daily Mail to Australia in early 2014. dailymail.com.au will provide original Australian content while leveraging the global resources of the Daily Mail Group, Mi9 and the Nine Entertainment Company.
The Daily Mail’s global website MailOnline is the world’s biggest English-language newspaper website with 57.3 million monthly unique visitors globally, according to comScore.
“The Daily Mail has been one of the world’s most influential and trusted news brands since its launch in the United Kingdom more than a century ago. I’m excited that we can now offer Australians a local version with a strong focus on editorial integrity and campaigning journalism,” said Martin Clarke, Publisher, MailOnline.
“This partnership with Mi9 makes complete sense to us. Two trusted brands with a commitment to journalism will offer stories that will set the agenda in Australia. We’ve had Australian readers for many years now, being able to provide them with the latest local news alongside the stories that matter from the Daily Mail’s reporters from around the globe, is extremely important to us,” said Mr. Clarke.
“With the Daily Mail Australia operating alongside the ninemsn team, we’re aiming to create the largest digital news team in the country. This will provide Australians with a richer offering of news, lifestyle and entertainment stories in the unique MailOnline style. Most importantly, just like ninemsn.com.au, the Daily Mail Australia won’t sit behind a paywall,” said Mark Britt, CEO, Mi9.
“At Mi9 we’re committed to the future of digital media in Australia. While many of the industry’s players have been cutting back their editorial resources, we’re excited to be increasing our editorial footprint online,” said Mr. Britt.
David Gyngell, Chief Executive, Nine Entertainment Co (NEC), parent company of Mi9, welcomed today’s announcement.
“At NEC we want to entertain and inform Australians. We’re no longer just a television network on the East Coast of Australia, but a diverse national digital media, entertainment and events company. We’re proud to offer leading television programming through Channel 9, Gem and Go, and the most trusted and timely news coverage across Nine News, ninemsn and in early 2014, Daily Mail Australia.”
Page 2 of 2
“This joint venture, the recent acquisitions of the WIN television stations in Adelaide and Perth, and taking control of Mi9 have reinforced our strong commitment to providing a continuous source of news and entertainment across Australia,” said Mr. Gyngell.
The Daily Mail Australia will be based out of NEC and Mi9’s offices in Sydney. Recruitment commences immediately for the Daily Mail Australia editorial team. The Mi9 Media team will sell its advertising alongside Mi9’s other digital properties including ninemsn, Xbox, Skype and outlook.com.
The Daily Mail Australia will launch in early 2014 at www.dailymail.com.au
The above arrangements are not expected to impact the FY14 financial forecasts contained in the Prospectus in relation to NEC’s initial public offering (IPO).