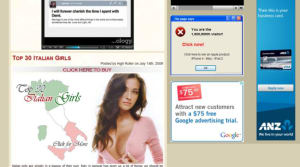 The industry group responsible for the code of conduct among online advertising networks has slated blame to online ad exchanges and agency trading desks for a series of blue chip brands appearing on sex-related sites in the past week.

“Almost 100% of those ads haven’t got anything to do with our members,” said IASH president and managing director of Postclick, Andrew Lockwood.

“This was an issue which emerged three or four years ago. It’s become more prevalent now because we have ad exchanges and agency DSPs [demand side platforms] which weren’t around then. To the best of my understanding, these sites are not running on any IASH member networks. To an extent, the exchanges have taken the role of the ad networks.”

Lockwood said IASH was investigating Adconion’s inclusion of TV Links in its publisher list for advertisers – the file sharing site which carried ads from Telstra and ING Direct, and could potentially facilitate TV programming which breaches copyright rules, although there was no sex related content for these advertisers. But other major advertisers including Westpac, ANZ, Sony and Coles Supermarkets have all appeared on sex-related websites.

IASH has 10 members in Australia and are audited by the Audit Bureau of Circulations.  Members include Post Click, Adconion, Max Interactive, 3D Interactive, Gorilla Nation and Ad2One.