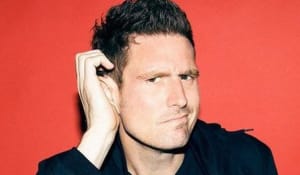 It appeared on Anderson's Twitter account just hours after Network Ten confirmed it had appointed Howcroft as its executive general manager and head of Melbourne operations. The announcement followed months of increasing industry speculation, with the move effective from early 2013. Howcroft is Y&R Brand's current chief executive and chairman in Australia and New Zealand.

The comedian originally suggested I Wil Survive and The Tod Couple, with several users quickly adopting the hashtag to voice their ideas.

Anderson has since retweeted several responses including Deal or Deal, The Price is Always Right, Wheel Of My Fortune, The Bald and The Beautiful and HowzAD: Russel's War.

The Twitter trend followed weeks of low ratings for the struggling network, with its much-hyped new formats like The Shire, Everybody Dance Now and I Will Survive failing to attract high numbers.

Everybody Dance Now, fronted by Sarah Murdoch, was axed after only a handful of episodes.

Howcroft's upcoming position at Network Ten will require him to oversee its Brisbane, Adelaide, Perth and Melbourne operations. He will report to Ten chief executive James Warburton.

However, it is understood Howcroft will continue to appear on Gruen Planet despite the move. The ABC show posted the following statement on its Facebook page yesterday: "Russel's change of job does not mean he's leaving Gruen. It does mean we will probably make more jokes about Ten shows #iwontsurvive."