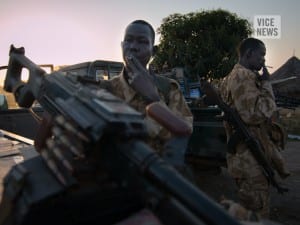 Young people are not being served by current news formats and reporting. That's according to alternative media outlet Vice. It is stepping in to fill the void and tell the news in the way Gen Y wants it. That is, "no bullshit" according to the firm, and via YouTube, where the younger eyeballs are migrating.

Whether that means hipsters in war zones remains to be seen. But there is an insatiable appetite for news more broadly. News programs make up at least half of the top ten most watched programs in Australia on a nightly basis. Vice thinks that is an opportunity and is preparing to take on mainstream news media.

Its strategy is young reporters, first person accounts and an immersive experience. Vice reporters use Google Glass and drone cameras to give the news another angle. Michael Slonim, Vice Australia managing director, says it will deliver the news in a way unlike any other news outlet.

The beta launched this week for an invite only audience. Vice will tweak the platform in response to feedback on the service and content and it will open publicly over the course of the next few weeks.

Vice has offered news on its YouTube channel for a while but the beta launch “formalises” it, says Slonim.

He told AdNews the potential audience in Australia is huge and it will up staff its news team in the local market to cover both news events at home and overseas.

“[Vice News] is no bullshit, it's honest, immersive and first person. It's young correspondents in front of the cameras talking. There's an appetite for it. It's the future of news when it comes to young people. [They] do care about news but not in the way its made right now,” he said.

“We target 18 to 34 year olds and there's a couple of million [in Australia]. They are smart and curious and want to know what's going on out there. They are deeply concerned about the shit that's going out there whether it's on our shores or further afield. There are big audiences who are engaged with this stuff and with politics and there's a big gap for this content,” he said.

YouTube will be the main point of distribution for Vice News but it will also continue to partner with traditional media outlets like Fairfax, The ABC and Foxtel. It will also integrate content with Google+, Google Maps and other YouTube tools and a native android app is in the offing.

While it won't follow the traditional news cycle, the video-driven news service will deliver long and short form reports, breaking news, live streams and documentaries as well as a 'daily capsule' of news coverage.  The content is designed to be shareable and social. The media firm will use its existing channels and social to promote the News launch and doesn’t plan any formal advertising.

“The stories themselves do a lot of the heavy lifting. For the task of creating awareness the best thing to do the talking is the content itself. Our coverage in the Ukraine is getting picked up and being passed around. Doing advertising or a campaign wouldn't be the right thing and it's not our style,” said Slonim.