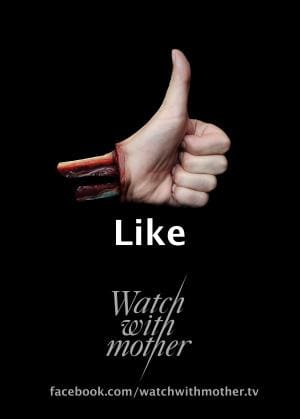 The Glue Society and Revolver Films are the latest creative outfits to launch a content series of their own, but the two have bypassed broadcast TV in favour of a distribution model exclusive to a paid iTunes app.

The idea for the six-part comedy-horror sketch series was hatched three years ago when The Glue Society approached Revolver and the two groups decided to collaborate on the project, which boasts Academy Award-winning cinematographer Russell Boyd (Master and Commander, Picnic At Hanging Rock, Gallipoli).

The Glue Society’s co-founder, Jonathan Kneebone, would not flag his app download expectations for the series, which will cost $1.50 per episode, but it is squarely aimed at a worldwide cult following of horror fans. Revolver’s managing director, Michael Ritchie, said “slashers, hipsters and those into comedy are all potential audiences” for the new show, Watch With Mother.

“There’s not much of a point putting too much pressure on ourselves on how things are going to go – we’re just interested in seeing what eventuates,” Kneebone told AdNews. “We’re hoping this is not just original content but an original way to watch it. The thing we’re always excited doing is something we’ve never done before and this feels like a genuinely new thing.”

The creators are relying heavily on 10 online movie trailers to shift people to iTunes to buy. “The trailer is a sales tool in itself,” Kneebone said. “The whole process of selling content is almost instantaneous.”

Ritchie said the black horror genre did not lend itself to traditional broadcast channels because audiences in markets like Australia were not huge, but when aggregated on a worldwide basis it suddenly created enormous potential. “This is a model which tests our digital strategy to get Watch With Mother sold,” Ritchie said. “The whole idea of distribution through an app format was logical and almost a result of the fact you couldn’t do anything else.”

The Watch With Mother app will be released on 13 June on the iTunes Store.

This article first appeared in the 1 June 2012 edition of AdNews. Click here to subscribe for more news, features and opinion.