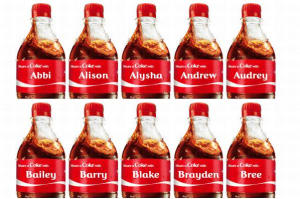 Following the success of the 'Share A Coke' campaign in Australia, Coca-Cola's global marketing boss Joseph Tripodi has revealed plans to take the initiative to foreign markets.

The ‘Share A Coke’ campaign has been praised by the industry within Australia, and has already walking away with a number of Cannes Lions, including a Gold in Outdoor.

Speaking at Cannes yesterday, Tripodi, who is executive vice president and chief marketing and commercial officer of The Coca-Cola Company, said: “We are actively looking at that and in fact we are very   convinced it will be picked up by a number of markets next year.

“We are very positive about that. It has been a big success for us in Australia. It is something which represented a true share value platform for us and with that kind of positive result at a business level and a brand level it is definitely going to move into other countries.

He admitted exporting the campaign will have its hurdles. “It is not easy to execute because there is a lot of moving parts on that, but the beauty is you learn from one market and your roll those learnings onto the next market"

Earlier in the day, in a seminar in the Debussy Theatre in Cannes, Tripodi had a playful dig at Australia’s expense.

“Is anyone here from Australia. Okay, they got up. It's amazing   Australians got up this early. I know you were sleeping on the beach   and you've just come in. You’re heroes to come and make it.

He went on to discuss ‘Share A Coke’. “This is a great example from Australia called ‘Project Connect (Share a Coke)’, a unique program. It was a bold move that resulted in a significant reconsideration of the brand. You would have never thought The Coca-Cola Company a decade ago would have done something like this.

“You can see that social was part of that program. It created lots of   unexpected value, value that was shared with Australian consumers and   our retail customers. The result was our retail partners in  Australia saw a significant increase in our sales in that category   over that time period. It was a wonderful program and it was a big bold move.”