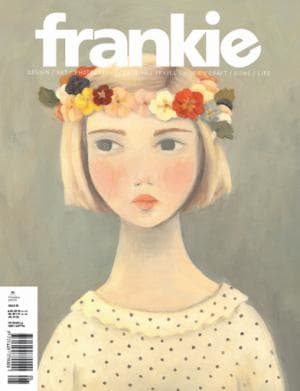 The changing of the guard in the women's lifestyle mag category continures, with Frankie recording another quarter of stellar circulation growth as Cleo, Cosmo and Marie Claire dropped significantly. Frankie would likely baulk at being described as being aimed at 'hipsters' but its growth might suggest that 'alternative' culture is becoming more mainstream.

While the total magazine circulation market declined 6.23% year-on-year in the six months to June 2013, Morrison Media's Frankie headed in the opposite direction, racking up 10.8% growth, according to the Audit Bureau of Circulations.

More traditional lifestyle and fashion magazines did not fare so well. Bauer's Cosmopolitan and Cleo dipped 17.5% and 17.4% respectively, while Pacific Magazines' Marie Claire fell 7.8%. However, other's women's titles including Bauer's Harpers Bazaar and NewsLifeMedia's Vogue Australia inched up 0.23% and 0.36% respectively.

Despite some positive results, there were a number of dismaying drops across the board. The biggest single decline was seen by Skyjack's Moshi Monsters, a children's gaming title, fell 47.3% year-on-year in the first half of the year. A wildly successful franchise over the past few years, could the drop off signal that kids have moved on to something else?

Although most categories saw declines, the home and garden category increased 1.8%, with Bauer's Real Living, up 17.7%, helping drag the category into the black. Pacific Magazines' Australian Home Beautiful rose 8.9%, Bauer's Belle climbed 7.26% and Readers Digest's Australian Handyman nailed on another 6.7% in sales.

The food and entertainment category dropped 8.3%, although increases were seen by NewsLifeMedia's Delicious (5%) with marginal increases from Donna Hay (0.2%), and Bauer's Australian Gourmet Wine Traveller (0.7%).

Meanwhile, in the six months to June, the crafts and hobbies category increased 14.9%.  But the motoring category stalled, dropping 11.8%. Men's lifestyle was down 14%, and mass women's down 5.8%.

In terms of overall print sales, Bauer's Australian Women's Weekly dipped slightly (1.4%) but remained at the front of the pack, with 459,175 print sales. Other contenders for the circulation crown included Pacific Magazines' Better Homes and Gardens and Bauer's Woman's Day.

"Australians spent $386.4 million dollars on a total of 72.8 million officially-audited magazines in the past six months, which means almost five copies were bought every second," he said.

"That consumers continue to invest their time and discretionary spend on that level is proof of magazines’ enduring appeal and is a credit to the teams behind these diverse, engaging titles."

That contrasted starkly with Pacific Magazines chief Nick Chan. He told AdNews: "I wish it was a more buoyant market in terms of circulation, but we are all in tough economic times, and we just have to hope for a turnaround."