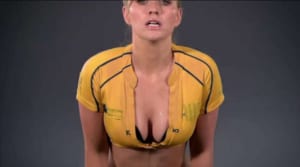 The Advertising Standards Bureau has upheld a complaint made against Lynx's raunchy viral video "Rules to Rugby".

The video, which depicts scantily clad women demonstrating the rules to rugby in a tongue-in-cheek manner, was found to be in breach of Section 2.1 of the Australian Association of National Advertisers (AANA) Code of Ethics.

The board determined that "the advertisement depicts women in a manner which amounts to discrimination against women".

The online video was created by Soap Creative and received over 1.4 million views on YouTube.

Unilever has since removed the video from the Australian and New Zealand Lynx YouTube channels and has "taken steps" to have duplicate versions of the video removed, "so far without sucess".

One of the complaints read: "This ad is blatantly sexist against women. It depicts women playing rugby but styles them in skimpy outfits indicating that a woman's place in sport is as sexual entertainment for men rather than as equal or legitimate participants."

In its response to the ASB, Unilever noted that the majority of the complaints incorrectly asserted that the ad had appeared on TV after being directed to lodge complaints by the Facebook page of women's group Collective Shout.