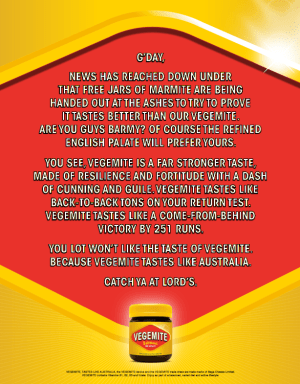 The latest twist in the mitey battle between Vegemite and Marmite for spreads pride has been revealed.

During the third test while those who love it are putting Marmite on their toast - and those who hate it have something else - the English will hear a "rousing" radio ad gently reminding them why Australia will win the Ashes.

“We are increasingly disturbed by Marmite’s insistence they won’t be tampering with their Marmite," Vegemite senior marketing manager Matt Gray says.

"If people love or hate it then surely they can do what we’ve done and find a taste that unites the country. We don’t want to mention Brexit or a parliament divided, but we think they are a manifestation of a country disjointed."\

Marmite has continued its salty attacks on Vegemite and Australia throughout the Ashes, referencing the infamous ball tampering scandal in an ad in UK newspaper The Mirror and then handing out branded sandpaper at the cricket.

The sandpaper read: Love it or hate it, we won't be tampering with it.

Gray says Vegemite's radio ad reminds Britain that Vegemite doesn't divide the nation in the same way that Marmite (...or Brexit) does.

"You see Vegemite unifies. Vegemite Tastes Like Australia and that’s why we all love it," he explains.

"And if we are all united around our taste for Vegemite well it just follows seamlessly that invariably we’ll win the Ashes."