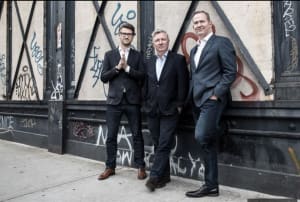 VCCP has bought US based agency Muhtayzik Hoffer as part of an expansion plan that sees it create an international "challenger network for challenger brands".

The British agency group, which opened offices in Sydney three years ago, also has offices in Madrid, Prague and Berlin with more than 850 staff in total. The Muhtayzik Hoffer acquisition gives it a foothold in San Francisco and in New York where the US agency plans to launch in the next few months.

Charles Vallance, cofounder and chairman, who is in Sydney as the acquisition is announced, tells AdNews the acquisition is part of a growth plan to become a true international "micro network" that can offer a genuine alternative to the larger networks.

Both agencies have a focus on working with challenger brands and VCCP opened its Sydney agency three years ago to launch comparison site Compare the Market to Australia. It was behind the much awarded Compare the Meerkat work that originally ran in the UK.

VCCP cofounder Adrian Coleman describes the partnership as a "joining of like-minded souls".

John Matejczyk, co-founder and ECD at Muhtayzik Hoffer says: “When we met VCCP, we just genuinely liked them. We wanted to hang out with them, share visions of the future, push each other to do the best work possible, and make ambitious plans together for the brands we work on. We share a deep desire to unleash creativity, in all its forms, on business problems and opportunities.”

David Kennedy-Cosgrove was promoted to run the Sydney agency last month following the departure of former MD Peter Grenfell who has returned to London.

Kennedy-Cosgrove added: “As challenger agencies for challenger brands, we’re ecstatic to be making work together that helps clients leave a commercial and cultural dent.”

VCCP is part of Chime Communications which was bought by venture capital fund Providence Equity last year. Since then, it has been developing an expansion strategy that focusses on the US and Asia. The terms of the deal are not disclosed.