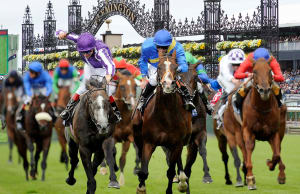 Twitter will show this year’s Emirates Melbourne Cup to a global audience in the first live streaming deal outside of the United States.

The social media network has inked a partnership with the Victoria Racing Club (VRC) to live stream the race that stops a nation on 2.30pm on 1 November 2016. It will be available worldwide to Twitter’s logged-in and logged-out audience on all connected devices.

Live streaming of sport is relatively new to Twitter with the NFL and Wimbledon among the first competitions to strike a deal with the social media platform.

The hour-long broadcast will include 30 minutes of build-up before the race followed by post-race commentary and analysis from Channel Seven.

"Live streaming the race that stops a nation with the VRC and the Seven Network, combined with the live commentary and conversation on Twitter, will create a one-screen experience at the centre of the action unlike any other."

Although Twitter will live stream the event, it is possible viewers could experience a similar buffering lag that has frustrated some fans watching Optus Sports’ streamed coverage of the English Premier League. This is an unavoidable limitation of current streaming technology.

“The Emirates Melbourne Cup is one of the hotly anticipated events on the global racing calendar," he adds. "By leveraging the power of Twitter's enormous real-time platform for reaction, commentary, analysis, and more, this partnership will provide viewers the opportunity to watch Channel Seven’s exceptional production and interact with the action on and off the track as it happens live on smartphones, tablets and computers."

In addition to the live stream, the @FlemingtonVRC Twitter account will also be tweeting video clips over the course of the Melbourne Cup Carnival, including the concluding stages of every race, fashion, celebrity and venue highlights and a range of exclusive behind the scenes action.

Twitter will also set up a mobile #BlueRoom activation inside the exclusive Birdcage enclosure during the Melbourne Cup Carnival to facilitate interviews with racing, fashion and other well-known identities that will be Tweeted out as short video clips.