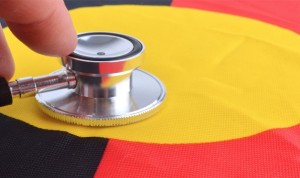 The Aboriginal flag is privately-owned by one man, a surprising fact for many who see the symbol as an inseparable part of the overall image of brand Australia, along with the kangaroo, koala and Uluru.

Harold Thomas, who descended from the Luritja people of Central Australia, designed the flag in 1971, and the Federal Court in 1997 recognised his ownership against two other claimants.

The flag, first used as a symbol of the Aboriginal land rights movement, was recognised in 1995 by the Federal Government as a flag of national significance under Australian law.

Thomas collects royalties from businesses wanting to use the flag via exclusive licences his has given to three companies -- one of which is non-indigenous company WAM Clothing with a licence to produce the flag on apparel.

This is where the conflict arises. WAM has been sending cease and desist notices to groups using the flag. These include the AFL, NRL, Aboriginal health promotion business Spark Health, and its clothing company, Clothing the Gap.

WAM Clothing told AdNews it is under “obligations” to enforce the copyright as part of its arrangement with Thomas.

Spark Health and Clothing the Gap have since started a petition #PrideNotProfit on change.org calling for action to allow the flag to be able to be used by First Nations people, as originally intended. It has already close to 40,000 of the 50,000 signature target and has been backed by Northern Queensland MP Bob Katter.

Thomas has granted a number of licence agreements since 1997 with organisations, both indigenous and non-indigenous, which he believes hold a “deep interest in the Aboriginal plight”.

“As it is my common law right and Aboriginal heritage right, as with many other Aboriginals, I can choose who I like to have a licence agreement to manufacture and sell goods which have the Aboriginal flag on it,” Thomas says.

“The Aboriginal flag is doing its job as it was intended to do, to bring unity and pride to all Aboriginals. At times we get the few who snigger and are disenchanted. I can’t satisfy all black people who wish to break up the Aboriginal unification.”

Chair of the Australian Copyright Council Kate Haddock says that despite it being a national flag, both Thomas and WAM Clothing are within their rights as per the Copyright Act 1968.

“It is unusual because it has also been declared as a flag but when the government declared it as a flag they also didn’t buy the copyright from him [Thomas],” Haddock says.

“The government website about the flag says it is protected by copyright and this is who you should contact should you want to reproduce it. So, it’s unusual but in terms of copyright law he’s the author, he’s the artist and he’s entitled to protect his copyright.”

She says that while the Copyright Act does hold several exceptions, in this case it is unlikely organisations such as the AFL and NRL will be protected.

In a statement to AdNews, a spokesperson from WAM Clothing says the business aimed to promote the Aboriginal flag in a “positive light”.

Despite the backlash the clothing company says it has been “actively inviting” organisations who wish to use the flag on apparel to contact them, as well as enforcing the copyright to organisations who are using the flag.

“We have been taking those steps since November 2018. WAM Clothing has been stopping the sale of clothing bearing the Aboriginal flag by overseas web-based companies,” the spokesperson for WAM Clothing says.

“All correspondence to Australian companies includes the direct invitation for them to contact WAM Clothing with respect to the use of the flag.

“It makes it difficult to resolve any concerns or reach a resolution when certain organisations do not contact us to discuss, this includes Spark Health/Clothing the Gap who have initiated the recent petition.”

Patricia Adjei, who is the arts practice director for First Nations arts and culture at the Australian Council for the Arts, says one of the biggest blows for the Aboriginal community in Australia is WAM Clothing’s association with selling fake Indigenous products made in Indonesia.

One of its directors Ben Wooster was prosecuted by the Australian Consumer and Competition Commission (ACCC) for selling fake Aboriginal art under the business Birubi Art Pty Ltd.

“This is upsetting for many Indigenous peoples as this company has been found to be making and selling fake Indigenous art products by the ACCC,” Adjei says.

“This is where we need to see laws to protect Indigenous art and culture which do not see legal protection under existing intellectual property laws.”

In October 2018 the Federal Court found that Birubi made false or misleading representations about the products it sold, claiming they were made in Australia and hand painted by Australian Aboriginal persons in breach of the ACL.

From July 2015 to November 2018 Birubi sold more than 18,000 boomerangs, bullroarers, digeridoos and message stones to retain outlets around Australia.

These products, despite featuring designs associated with Australian Aboriginal art and words such as "Aboriginal Art", "genuine" and "Australia", were made in Indonesia.

Adjei says that in both Panama and the United States, there are laws designed to protect Indigenous art and culture. However, these do not exist in Australia.

She is currently working on the establishment of a regulatory body ,the National Indigenous Arts and Culture Authority (NIACA) ,but says the government could do more to help protect Aboriginal works.

In regard to the flag, Adjei says that if it is of “national significance” the government should buy an exclusive licence from Thomas to enable other Aboriginal people to use it.

Spark Health and Clothing the Gap declined to comment. Both the NRL and AFL have been contacted for comment.