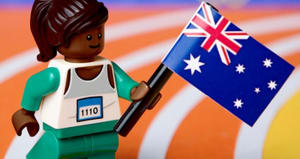 UPDATED: Toy brand Lego has omitted the Aboriginal flag from a recreation of Cathy Freeman's famous 400m win at the 2000 Sydney Olympics as part of its 'Creating History' campaign.

The iconic historical moment saw Freeman parade her victory with both the Aboriginal and Australian flags. Lego's decision to ditch the Aboriginal flag has already stirred comments on social media networks with one user labelling the oversight "disgraceful". The recreation is accompanied by text which clearly identifies the Freeman 2000 Olympics moment.

The 'Creating History' campaign has turned several moments in Australian popular culture and history in the last 50 years into Lego models, and also includes Queen Elizabeth's opening of the Sydney Opera House in 1973, Cadel Evan's 2011 Tour De France win and the late Steve Irwin's controversial feeding of a crocodile while holding his new born son in 2004. The brand's website showcases the top 10 moments chosen by viewers to be recreated.

The figures were whittled down from 25 to 10 via a public vote, and have since been assembled and snapped by British photographer Mike Stimpson. The campaign aimed to celebrate Lego's 50th Australian Anniversary and is part of its 'Festival of Play' push.

Lego was unable to be reached for comment at the time of writing, but has since responded with the following statement from director of marketing Caroline Squire.

She told AdNews: "We worked closely from a selection of photographic sources to ensure each image was as accurate a representation as possible when using LEGO elements.

"The gallery of images released this week is the culmination of this two month process and represents a variety of serious and light hearted moments from our history, sports and the entertainment industry.

"Cathy Freeman's inspiring 400m Gold medal win as depicted was a truly proud moment for all Australians and certainly no offence was intended with the image we recreated from a shot that only clearly displayed one flag."