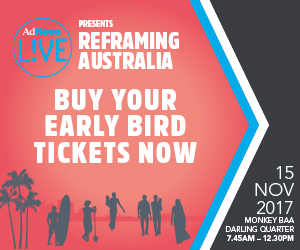 Adrian Swift, Nine’s head of content production and development, will appear at AdNews Live! Reframing Australia on November 15to address alleged whitewashing across the entire Australian media landscape, and how oncoming changes will better serve adland, brands, and the country as a whole.

Adrian Swift was appointed Nine’s head of content production and development in 2016, after a significant, high-profile career that has spanned production and journalism roles both here and abroad, including The Sydney Morning Herald, Endemol, Mirror Group Newspapers, the BBC, ITV, SBS and the ABC.

Swift will join three other panellists – whose names will be unveiled next week – on the first discussion of the day: A Re-Imagined ‘Straya - how media, TV and advertising needs to shape up, be mindful of who it is depicting, and how the representation of a more genuine Australia will better serve adland, brands, and Australia as a whole.

Names already secured for the half-day event, on November 15th at Monkey Baa in Darling Quarter, include Meat Livestock Australia’s marketing honcho ANDREW HOWIE, The Monkeys’ SCOTT NOWELL, who will give an exclusive presentation and Q&A, as well as Multiconnexions’ SHEBA NANDKEOLYAR, Etcom’s LOU PETROLO and Identity Comms’ THANG NGO.

AdNews Live! Reframing Australia will explore the disconnect between the industry and our changing demography, and why brands that do not adopt a more representative approach will lose.

As the 2016 census revealed: 16.2m people live in the cities. Almost 8m live in the regions. 1 in 5 Australians speak a language other than English at home. 1 in 3 Australians in Sydney and Melbourne don’t speak English at home. 26% were born overseas. Of 6.1m families in Australia, 44.7% are couples with kids, while 37.8% are couples without children. Same-sex couples have risen by 39%.

Watch a video here that gauges opinions on Sydney streets about our changing country.