Your brand is dead 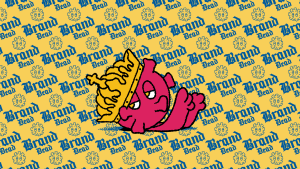 Reece Hobbins is the director of brand development and innovation at Melbourne-based creative agency, TABOO.

The cause of BrandDeadness is unexpected, often unpreventable and always traumatic. It can be a slow death similar to a tumour or it can hit you in the face like a car crash only the Kool-Aid man would survive (let’s be real, dude was a glass jar and yet could break through a brick wall of flavour oppression).

The state of being BrandDead is when the symbol or name of a brand is overwritten by an immovable force of negativity that not even time can forget. The swastika being the most famous example. A symbol dating back to 5000 BCE, an ancient religious and ceremonial icon in vast cultures; representative of everything Nazism wasn’t. Pre 1930s it was found everywhere from the Carlsberg Beer logo, a Canadian women’s hockey team, the Finnish Air Force logo and in many coats of arms. Unfortunately, everything good about the symbol was consciously and subconsciously overwritten by the biggest genocide in history.

Make no mistake, BrandDeadness is not just a clever analogy. The primary symptom is real human death with a body count. For example, if a ‘Florida Man’ kills his wife for forgetting their suitcase combination and his name also happens to be Reece Hobbins, I’m probably going to get an unnecessary amount of texts from mates who think they’re funny for a week or two. If I lived in Florida I’d maybe consider moving, but I’m not going to change my name. If ‘Florida Man’ Reece Hobbins becomes a serial killer and unleashes death on a much bigger scale, then for the sake of my own sanity, my family’s well-being and any hope of future employment, I’m probably going to change my name.

When a business or brand becomes BrandDead it’s because their #1 brand association is death, not because they sell urns or tickets to Baby Shark live in concert. Death was not intentionally at the top of their brand pyramid PowerPoint chart (unless that pyramid was made by slaves in Egypt 2500s BCE). Their name, logo or any other brand asset has become synonymous with something horrendous. This brings us to January of 2020 when one brand unfortunately received such a diagnosis. It’s terminal, gaining speed and there is only one way to cure it.

Corona needs to change its name. Yes, the Mexican beer, not the virus. Case in point I had to clarify what I was referring to. See, subconsciously you’ve already assigned it as BrandDead. Just imagine if it was your job to follow the Google Alerts for ‘Corona.’ That is a job no Zoomer is applying for. But seriously, what is InBev, the multinational brewing company who owns Modelo who owns the Corona brand, waiting for in changing the name? Is there one of those homemade, donation thermometer cut-outs in their head office with a ‘Measurement of Global Deaths by Coronavirus’ written on it? If it hits ‘x’ amount of deaths they’ll decide to change the name? Surely they don’t think people are going to forget about this?

It’s nearing the end of July and there are over 600K deaths globally. Now safely assume that each of the deceased has at least one living family member. That’s over 1 million people who now personally associate the word ‘Corona’ with death in their family. No one is bringing Coronas to the family wake. Happy hour is no longer happy. Even more, Corona’s secondary brand associations are long-term health complications, crushing debt, job loss and social inequality. This is the brand triangle of destruction, depression and despair. Imagine being in charge of Corona’s brand-tracking research; focus groups would resemble true-crime podcast interviews. Things are not getting better. 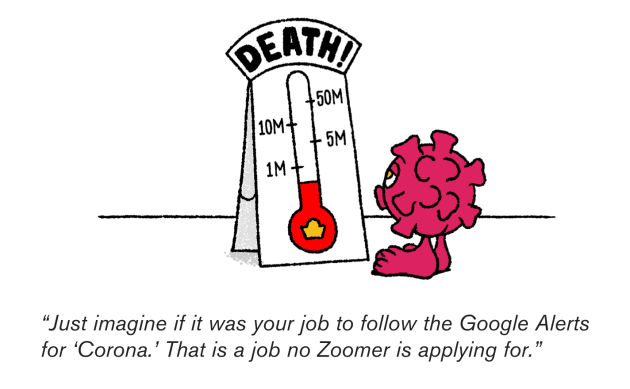 So the question is, what is InBev’s exit strategy? The moment coronavirus hit the news in January, I couldn’t wait to see if they’d put out a press release. Sure enough, their PR team went on damage control and released the message of, ‘we believe consumers will be able to tell the difference between Corona and the coronavirus.’ Well of course most people know the difference and will still buy the beer before the virus has disrupted their world. You’re missing the point. It’s a virus. It’s your brand name but now with the permanent new last name ‘virus’, sans hyphen, like you’ve just married into Death. That’s not a good look. Spreading is the only thing a virus knows how to do and no amount of expensive beach & surf bro nature porn TVCs is going to overcome that in the long-term.

The truth is, a brand re-fresh can be soul-destroyingly hard. It takes a long time on this kind of scale to rollout and costs a ton of money to implement. Luckily for Corona, I’d argue their name isn’t their most valuable brand asset. It’s the clear glass bottle, the contrasting blue & yellow and most importantly the occasion; relaxing on a Mexican beach in the middle of summer, disconnected from the horrors of the modern world.

This is my solution: name it something like Mexican Sun Extra. You can keep the same typeface if you want. There is no Mr. Corona that owns the business, with a nephew who designed the logo. All of Corona’s brand equity is in the bottle itself and the sessionability of the liquid. Focus on the positives; Mexico, summer, beach, relaxation, refreshing. We can all probably agree the idea of laying on a sunset beach in Mexico with a bucket of beers, sounds hell of a lot better than a hospital bed with a virus-filled beer bong halfway down your throat.

What other options does InBev have? What are their true risks other than the financial costs to rebrand Corona? I’d argue that no beer drinker really cares what the name is anyways. Corona is a commodity beer brand of scale, purchased for function (thirst) and value (low cost). No one buys Corona for status or flavour, especially not new beer consumers. There is no brewing figurehead or iconic birthplace associated with the brand. Corona is just a name meaning ‘crown’ and unfortunately for them, they’re witnessing first-hand how the dominate definition of words can quickly change.

InBev has an opportunity to avoid Corona becoming BrandDead, but a brand strategy of hanging onto how you perceive what your brand once was, while ignoring the new reality of people’s perceptions of a word, is the sunk-cost fallacy in action.

It’s very likely that the senior team at InBev are in daily discussions about what to do with the Corona brand. I bet those Google Alert reports cannot be trashed fast enough. Maybe they are going to just ride it out, like a terminally ill patient, achieving less and less with each passing month. Maybe they see this as an opportunity for change. Something to rally the team around. A forced evolution of the brand; planning to undergo emergency surgery and work their asses off to rehabilitate with a brand rebirth.

You can also look at the problem in another way, if you were to start a new beverage brand tomorrow would you name it Malaria Margaritas or Alzeheimer Ale? Tens of millions of people would probably say, over my dead body.

Words and illustrations by Reece Hobbins.