The context behind ad complaints 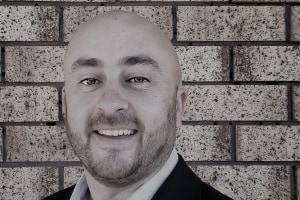 But how can campaign size, media placement and creative execution equally have a negative impact on your brand?

To help answer this, let’s take a close look at the top 10 most complained about ads in the year to date, released by Ad Standards earlier this month. The list ranks each ad by volume of complaints made as the leading indicator for the degree to which those ads caused offence. As the rankings are, in effect, produced as a reflection of each creative execution, the opportunity, then, is to consider whether the remaining two drivers of mental availability were also factors in audiences going mental over these ads.

The impact of campaign size

In order to contextualise complaint volume, we looked to the Adgile Catalyst platform and identified the size of each campaign by audience delivered against Total People between 1 January and 30 June this year. In comparison to the volume of complaints made we found considerable differences between share of complaints and share of audience: 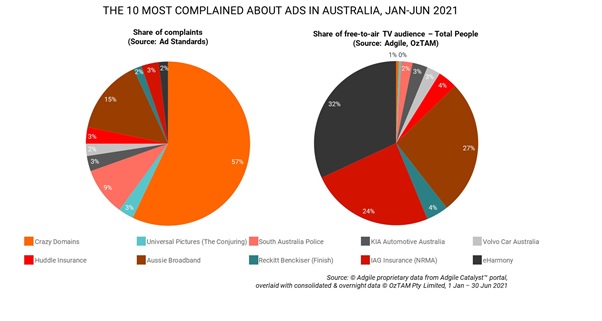 For each ad, we then divided the number of complaints made by the number of people exposed, in millions, in order to derive a ‘complaints per capita’ metric that allowed us to understand complaint volume in ‘real’ terms. From this new metric, we derive a new set of rankings: 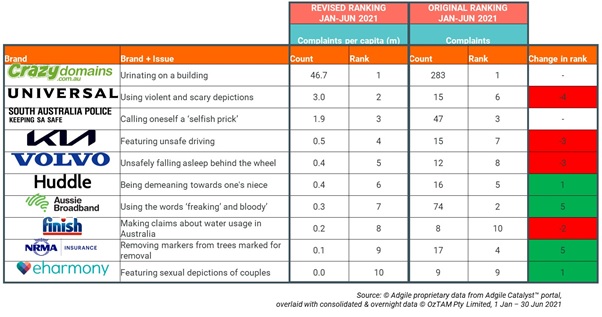 While Crazy Domains retained the number one position by complaints per capita, Universal Pictures, Kia and Volvo climbed the complaints ladder, while Aussie Broadband and NRMA Insurance took a reprieve.

Off a low base of complaints to begin with, it’s a rudimentary exercise. But what the results indicate is that campaign size directly contributes to performance, for better or worse, serving as a reminder to marketers that effectiveness should be considered through both creative and media lenses. The analysis is also analogous to the effectiveness versus efficiency “debate”, reinforcing that efficiency (or in this case, complaints per capita) and effectiveness (complaints) are of equal importance.

The impact of media placement

Let’s put a lens on the Crazy Domains advertisement. The drunk man peeing on the wall of a store front after a night out is clearly not a category entry point for domain name purchase. The depiction is a metaphor for the relative challenges of running a bricks-and-mortar store. The team at BWM Dentsu do well to extend this metaphor across multiple executions and in a way that’s relevant to the brand’s cheeky and daring personality, if the current billboard that ‘caught fire’ on the Westgate Freeway in South Melbourne is anything to go by.

What matters, though, is the context in which the peeing man metaphor has been delivered. In the month of May when the ad ran, 75% of total audience was delivered during daytime hours, while almost 50% of total audience was achieved outside of the usual let-your-hair-down days of week. Not only that, but the second highest placement by programme genre was to a discerning news and current affairs audience.

It stands to reason that the content of the advertisement may have been less susceptible to complaint had it been placed within program environments or time zones that were more befitting of the situation being depicted. Crazy Domains did not need to reinvent its approach to media placement on account of one execution alone. After all, they ran another TV ad that depicts a noisy business meeting taking place in the day – that version could have been reserved for daytime TV, while the peeing man, in all his grossness, might have had a fighting chance in the night. Context is everything.

The implications of going cold

So what is the impact of a sudden – voluntary or forced – withdrawal of an ad from market? Much recession- or pandemic-related research exists to show not only how easy it is to lose brand equity when a brand goes cold, but how much harder it is for  that equity to be rebuilt.

But there are also more immediate implications. Take a look at this KIA Masterbrand ad, the fourth most complained about ad per capita so far this year:

The ad itself represents a clear, simple message delivered through the product in a compelling way – an overall nice piece by the team at Innocean Australia and just what KIA needed to help relaunch the brand earlier this year – but after 15 complaints were made about the ad depicting an unsafe ‘J-turn’ and after only seeing four weeks of airtime, the ad was promptly withdrawn.

By analysing Adgile Catalyst TV intelligence data we can clearly see what unfolded next for KIA: 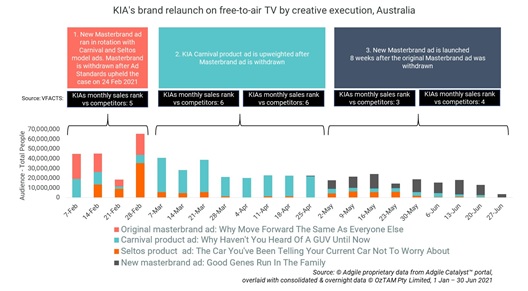 To break down the analysis, in the week after the Masterbrand ad was withdrawn from market, KIAs pre-existing Carnival brand ad, an accompaniment to the brand relaunch, was promptly upweighted, seemingly to pick up the slack. At the end of an eight week masterbrand ad hiatus, the forte held by the Carnival TVC for that whole time, a revised (and once again nicely made) masterbrand ad landed in market.

Worthy of note is that after the original Masterbrand ad was withdrawn, KIAs sales rank according to VFACTs data, dropped in the March and April months when Masterbrand advertising was absent, but then rose again in the same months that the new Masterbrand ad re-emerged.

As the adage goes, correlation should never imply causation and much work has been done to demonstrate the lagged effect of advertising within longer purchase cycle categories like in Auto. But irrespective of whether any of the sales potential from the brand relaunch was actually lost as a direct result of the withdrawal of the ad, in the very least the withdrawal of the ad had immediate cost implications for the brand.

In short, while budget, media channels and creative strength all have their roles to play generating brand growth i.e., they do so by building mental availability, they can also have negative consequences for brands when not done well in combination; hence, marketers should consider all factors concurrently when evaluating the success of their advertising.

Stu Carr is Director of Customer Insights at Adgile.