Since Facebook’s launch, one of the primary activities conducted by brands has been generating fans for the company page and communicate with them without paying for the “advertising”. And if the fans shared the content posted by the company with their friends – extending the free advertising further – even better.

Company pages were the start of Facebook monetising its community through fan recruitment, so this approach was an important part of Facebook’s DNA. All this has changed, however, as Facebook shifts to a new ‘Pay to Play’ paradigm.

In recent months, we have seen a significant decrease in the organic reach in Facebook posts from company pages. MEC can now report that the average organic reach was less than 5.87% in February on average across 43 different fan pages in Australia. In August 2013, the organic reach was 15.09% – so it’s been a sharp drop in just seven months and we expect this trend to continue. 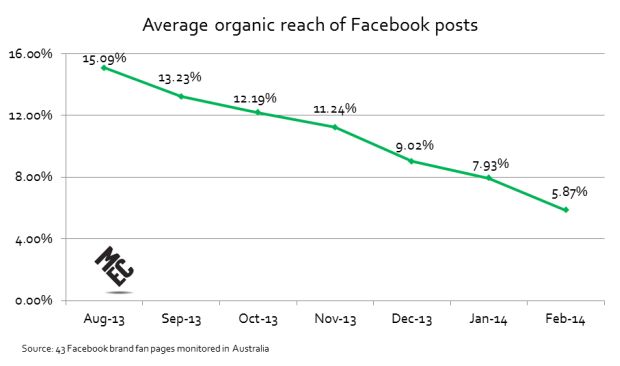 This drop was driven by Facebook’s shift in focus from fans to target audiences announced by Facebook in December 2013. This is a dramatic about turn with Facebook encouraging brands to use paid-for posts in the newsfeed rather than organic posts from the branded pages to reach their audiences. While Facebook assured brands they could continue to reach their fans with organic posts, the empirical data shows the social giant’s approach is to brutally decrease the organic reach in a short amount of time to a level where organic posting might not make sense from a business perspective. Companies will have to ‘Pay to Play’ on Facebook in the future.

1. What is the value of a Facebook fan with the new level of organic reach?

2. What is the ROI of my community management on Facebook?

3. What is the new role of Facebook in the brand communications mix?

Value of Facebook fans
The value of a Facebook fan has more than halved over the past seven months as a consequence of the lower organic reach. It is likely that companies won’t be able to reach their fans through organic posts in the future. Your fans will still have some value because the ads can appear with social context i.e. “Jennifer McCaffrie likes this page”. The social context has proven to improve recall and engagement levels of promoted posts significantly.

If a company had 100,000 fans on Facebook in August 2013, it would have been able to reach on average 15,093 of the fans organically – but if a company page with the same size posted organically in February 2014, the average organic reach would only be 5,872.

Facebook’s new role
Facebook’s role has changed significantly over the past year and is now focused on advertising in the newsfeed. Facebook reaches over 10 million Australians and has proven to be an effective reach and awareness driver like TV. The primary role of Facebook is now in the top of the marketing funnel.

There are a number of reasons for the effectiveness of Facebook advertising including the low cost, reach, targeting opportunities, impact of creative social context and cross-device opportunities. Companies are able to reach two million people in their target audience with impactful creative within a social context in the newsfeed on mobile, tablet and computer for only $25,000 in a month. No, I am not missing any zeros.

Facebook will be an essential part of advertisers’ mobile strategies in the future because all the reasons above are fully applicable to mobile.

Engagement can still play a role on Facebook depending on the objectives, but most campaigns on Facebook will have a reach and awareness purposes in the future. Facebook is now a broadcast channel, with the benefits of social context and engagement.

What is driving the new Facebook paradigm?
The cynics would say Facebook used the incentive of communicating with fans for free as bait to engage companies on Facebook. Now they are asking companies to pay for reaching fans they already paid to acquire.

Facebook has become a broadcast channel with high impact ad units in the newsfeed and high reach, and it has identified TV budgets as a new revenue opportunity – this is one of the reasons for the new Facebook paradigm. Facebook is in the process of realising its financial potential in advertising revenue, which has translated into a significant increase in the stock price over the past four months.

The new Facebook ‘Pay to Play’ paradigm means many companies have to rethink their social strategy and make important decisions. Don’t hesitate to contact me if you have any questions (Thomas.Lyngsfeldt@mecglobal.com).