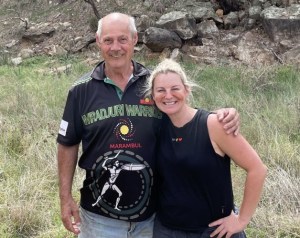 Imagine how much better we can be as an industry if we took inspiration from our country’s First Nations culture, writes OMD’s Philippa Moig.

Yaama, Warrami, hello. Most of you know me as Phil. I was born in Damaragal Country and I now live on Cameragal Country. I am a mum, a daughter, a sister, a wife and a passionate ally. Being married to a proud Wiradjuri man set me on a path of curiosity, discovery and learning.

As you probably know, this week is NAIDOC Week, which is all about celebrating and recognising the history, culture and achievements of Aboriginal and Torres Strait Islander peoples.

Our country has a very complex, beautiful and largely untold history. I don’t know about you, but I think there is something very special living in and on country that has a 65,000-year-old story!

I have been lucky enough to meet some special people who have opened my eyes to seeing the world differently. These bonds and conversations have often been sparked by just reaching out and having a yarn. For me, actively building relationships with Aboriginal and Torres Strait peoples has been really important and rewarding. I am discovering the person, ally and leader I want to be because of it.

Culture comes back to people. As an industry, we invest heavily in the development of our people. And our people are telling us that they seek more than a bump in cash, they seek meaning, a sense of belonging, purpose and connection. How would our industry change for the better if we sought some of these answers through the cultural lens of our First Nations peoples?

What if more leaders showed up as Aboriginal and Torres Strait elders do? Without ego and determined to pass on their wisdom, not gatekeep it. The gift of giving without the expectation of getting is a powerful thing.

What if people felt heard, not just listened to? Dadirrie is the Indigenous practice of deep and respectful listening. It is how stories were passed down through the thousands of generations. What is the modern-day cost of not being able to sit quietly, reflect and contemplate?

What would change if we dropped the hierarchy, and empowered everyone to show up as equals? Sitting in a circle of trust, listening and yarning through challenges to move forward seems a hell of a lot more appealing than another email (which I probably won’t read). This is what the Bora Ring is for.

What if we connected with one another (not just on LinkedIn), but REALLY connected? Without discussing where we work, our job titles or what we do, but WHO we are and sharing what makes us, us.

I have to thank cultural advisor Johnny Briggs for his generosity in sharing his wisdom with me. He might not know it, but he’s been a pretty big part in helping me figure out a lot of the above.

So, as you can see, culture can shape who we are and who we want to be. For me, it has also shaped my personal mission: “To mobilise the most powerful mob to answer the call!”.

You are probably thinking, what the hell does this even mean?

You and I have been asked to join our Aboriginal and Torres Strait Islander brothers and sisters on a journey, to vote YES in the proposed referendum on the Uluru Statement from the Heart. That means having a representative First Nations voice in parliament that will be consulted on matters that impact Aboriginal and Torres Strait Islander peoples.

Our industry can influence a YES vote and bring the NAIDOC 2022 theme to life: Get Up! Stand Up! Show Up!

Philippa Moig is Business Director at OMD Australia and a member of the MFA DE&I Advisory Council.