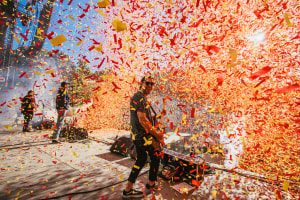 The late 60’s and early 70’s were a turning point; a counter-cultural catalyst that drove massive change in mainstream and political ideologies. Peace, social justice and multiculturalism were dominant paradigms. Ideas like free education gained favour. The power was with the people.

Every movement has a soundtrack, and the music of the time was inextricably linked with these burgeoning ideologies. Albums, musicians and events that are now so defined in the collective psyche that they need no description; Abbey Road. Billy Thorpe & The Aztecs. Woodstock. Let it Bleed. Give Peace a Chance. Ziggy Stardust. Janice Joplin. Jim Morrison. Jimi Hendrix.

The artistic and cultural bravery of that moment was a peaceful detonation that can still be felt through space and time. A fitting accompaniment to an era of new thinking. A movement realised by legions of like-minded people: Music Lovers.

Half a century later we find ourselves at another critical juncture. Issues like climate change and rising inequality dominate global forums. The question is whether we have the collective spirit to challenge the status quo, wielding today’s tools to create the next counter-cultural movement.

In an era of Candy Crush and sexting, you could be forgiven for deciding peak revolutionary spirit is behind us – but every facepalm has a silver lining.

We now exist with a level of connectivity that was previously inconceivable. Groups around the world are mobilising en masse through online platforms.

Think #metoo, Nike’s Colin Kaepernick campaign, school children filling the streets to protest for a better future. Look closely and you will see the global population taking on major adversity and fighting for change at a scale not seen before.

And what of the Music Lovers? Are they the same indomitable agents of change they were 50 years ago? Our instinct said yes – but this is the era of proof. So, we commissioned the largest ever study of Australian music fans to chart the beat that makes them tick.

The Love Song project spoke with nearly 10,000 music fans, and the results paint a picture of an engaged, influential and inter-generational group of people – ardent supporters of culture and eager to drive progress.

Three quarters feel they need to play an active role in order to make the world a better place – and almost all agree that young people need to stay engaged with these issues in the future to keep that momentum going.

More than 90% of Music Lovers are concerned about our environment and make a considered effort to reduce their negative impacts.

We also found that in this era where global activism and cat videos thrive in unison, the vast majority (70%) of Music Lovers still look directly to artists for inspiration – and doing that has never been easier.

Digitalisation has enabled music fans to celebrate with artists, amplifying their messages and taking on their philosophy, building powerful bonds and a dynamic that has real influence; influence at scale.

It has also empowered fans to become influencers in their own right – they have significantly greater online reach (3x in fact) than the general population.

They use digital tools to share stories and forge bonds with other creative communities over food, travel, film, fashion and art amongst other things.

The research describes a passionate demographic that lives for experience, saving $442/ month for the good times. One with influence and communication savvy and a passion for global issues. A cross-section of the most empowered members of our society to affect positive change.

Is that the 50-year storm we can all hear rumbling just off shore? Will change come incrementally or in a deluge? Whatever the answer, it seems certain that the Music Lovers will be front and center of the impending movement.

Secret Sounds partnered with Pollinate, an independent research agency to establish one of the largest tracking studies of its kind in Australia. We surveyed 9,866 music lovers aged 16+ across Australia to understand their passions, interests and lifestyle.

The survey was sent out to a subset of Secret Sounds subscribers who were given the chance to win VIP tickets to Splendour in the Grass, Falls Festival and Secret Sounds touring artists to incentivise participation. The sample distribution mirrors the Australian population in terms of gender and location but skews towards people aged under 30.