Much like during the London riots in 2011, when Londoners banded together under the #riotcleanup hashtag and used social media to organise community clean ups to help put the city back together after parts were burned and robbed by violent looters, Sydney-siders are coming together under a hashtag - #illridewithyou.

My thoughts are with those affected and their families. Out of the events in Martin Place yesterday, that dominated the news cycle and carried on throughout the night, ending with gunshots and the death of at least three people, including the gunman, has emerged something positive.

The hostage situation wasn't a marketing moment, but the public's response did offer a moment to be proud of in the midst of a crisis. As TV networks and radio stations across the country – and the world – trained lenses on the Martin Place café and many networks reported direct contact from the hostages at their captor’s orders, people watched events unfold online, on TV and on the radio.

Social media has also played a part in how events unfolded. It has shown that some people are hateful, intolerant and racist. But it has also shown that many, many more are the opposite. That Sydney-siders, and Australians alike, share a pride in their multiculturalism, that they don't want to be destroyed by the actions of fundamentalists.

Portrayal in the media of the siege, which lasted almost 24 hours and saw around 17 people held hostage by a man identified in the early hours of today as Man Haron Monis, has been varied, with little information emerging early on and hostages still held in the Martin Place café, until 2am when police stormed the building.

The story of a Muslim woman on a train removing her hijab over fears that there might be an ill judged violent backlash against Muslims kickstarted something. And people began to turn to social to band together. 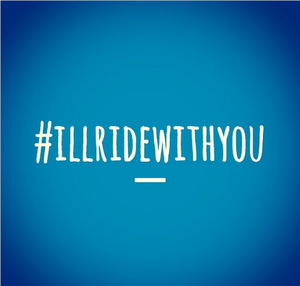 From one tweet about this woman, sprang a hashtag, and within hours a true, social movement that raced through social channels. From yesterday afternoon, my Twitter, Facebook and Instagram timelines were at first dotted, then flooded with support for the #illridewithyou movement – from Sydney, Australia and beyond.

And the hashtag translates into action on the streets. Sydney-siders putting their hands up to travel with Muslims on public transport fearing backlash, are following through.

Necessary, possibly not, but by 10pm last night, the hashtag had been shared around 150,000 times on Twitter alone. By this morning, around 335,000 times, a number that Twitter says is “quite extraordinary”. There are 40,000 public posts on Instagram - with many more likely on private posts.

Australia has been rocked by the event and #illridewithyou shows us something about people, and their power to rally together, and about the role that social media plays in how we live.

Just last week Australians rallied around cricketer Phillip Hughes whose death shocked the sporting community, with the emergence of the # PutOutYourBats hashtag.

Similarly, #PutOutYourBats was started by one man, and inspired a global movement that saw people in their thousands lay a cricket bat out to salute the fallen batsman. Over 200,000 tweets were sent using the #PutOutYourBats hashtag.

No a hashtag won't solve anything. It didn't help get the Martin Place hostages home safe to their families, it didn't change the fact that a young sportsman died in a freak on-pitch accident, but it does show that people can be galvanised into real-world action by a cause on social media.

It offers a channel of mass-expression, a public forum to lend support to others, to stand up and have their say and share their views in a way that just didn't exist just a few years ago. It reminds people that the public has a conscience and sense of community and that it goes beyond empty beyond ‘click-tivism’.

A hashtag, a trend, a campaign, will gain traction only if the context is real and resonates with people.

What's not real is when a brand, an advertiser or someone that doesn't understand the power of social media tries to force something to happen. That's not how it works. Too often brands and marketers are so obsessed with trying to create a movement their brand can own in social, they forget that social media is just that. It's social. It's people talking to other people.

#illridewithyou isn't marketing, it's social. And it’s social at its best.

Have any thoughts on this peice? Comment below or email me on rosiebaker@yaffa.com.au