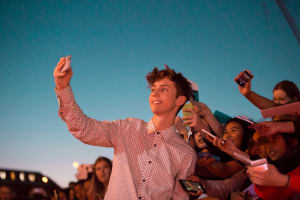 Google’s second Brandcast delivered YouTube talent in spades, to convince the ad industry to dive into their pockets to spend big. AdNews looks at its metrics and creators.

A few weeks ago, Google hosted its now annual Brandcast event and brought together advertisers, publishers, agencies and YouTube superstars to make its case that YouTube is a better bet for marketers than television. Google used the upfront-style pitch to convince the advertising industry to spend more of their marketing dollars with YouTube, and eke out spend that would previously have gone to TV. It poked some pointy stats at the TV industry to show its reach and ability to engage audiences, but while it made an impact, not everything is cut and dry.

Google focused particularly on ‘watchtime’ which it says is 60% up year on year, after increasing 28% in the 12 months previous. However, what is glaringly conspicuous in its absence is what watchtime actually means. When AdNews asked, Google’s industry lead, Bart Jenniches, declined to offer any other numbers to put it into context.

The market is clambering all over itself for a metric that translates across TV, digital, social and anywhere else. It’s coming slowly with Nielsen’s cross-platform metric due to come into play on 1 October, but Google isn’t making it easy.

Paul Saville, senior digital manager at Carat Melbourne, said: “A new engagement metric is certainly required. For any brand or agency to secure the funds to be ‘brave’, there needs to be a more universal metric that can measure and value the engagement of their target audiences, engaged participators and consumers.

“What’s missing here is an ROI value they can pull back from cost of content to the sale of product, something universal,” he added.

“YouTube should be uniquely positioned to take advantage of this … Will Google be prepared to be that open?”

At Brandcast, Google gave an update on Google Preferred – the top 5% of YouTube inventory over which it struck an exclusive deal with GroupM last year. So far, more than 200 campaigns have been run by 36 advertisers. It is currently in negotiations over how it sells that inventory when the GroupM deal expires in early 2016, with speculation around how other agencies can get involved.

Google turned to its Brandlift measurement tool to demonstrate the results those advertisers are seeing from investing in advertising alongside YouTube’s premium content.

Brandlift, for campaigns on Preferred inventory, increased 14%, according to Kelly Merryman, YouTube’s VP of content partnerships. That, she said, was “amazing in itself” but more impressive when compared with results from television ads.

“When you compare it to what you’ve all come to expect from television, which is single digit increases, it’s even more impressive. We know that YouTube works, we’re helping you to influence an incredibly valuable audience as you find it more difficult to reach that audience on TV,” Merryman said. But what the numbers don’t show, Carnegie added, is the “influence that those YouTube creators have”. That is what FanFest was there to provide.

For the first time, it combined Brandcast, its no-holds-barred commercial pitch to the advertising community, and its altogether very different FanFest event, which put some of its hottest YouTube creative talent on stage in front of an audience of real life fans. The decibels from screaming teenagers were so great that Google was handing out free earplugs to members of the corporate audience who had ventured to check out what FanFest was about.

The entertainment might not be to a marketing director’s taste but there is no arguing with what it demonstrated. And that is just how devoted the fans of the YouTube stars are and how influential their content is.

Moran, however, said clients were “wary of subliminal endorsement” and the effect it has on the authenticity of content.

“That’s what makes YouTube so special, it’s not about viral hits, it’s actually not about view counts, it’s about engagement between creators and fans,” she said.

“You see a richer interactive experience than you’re seeing on television. Mighty Car Mods fans aren’t just watching the video – they are commenting, liking, sharing it with friends, and often times, uploading another video, commenting on it or re-enacting it.

“When you create that kind of engagement, the relationship between Mighty Car Mods and their fans is that much more personal. It’s changing the definition of what it means to be a celebrity.”

Merryman, who joined YouTube this year from Netflix, said, “when you see the fans responding, you can feel the power of what it means to have a global reach of a billion people”.

The quality of talent on display, and the reaction of fans got the point across about the premium content YouTube has to offer. Carat’s Saville called it “staggering”.

Stuart Bailey, chief digital officer at OMD Australia, believes that, “long gone are the days when clients would associate YouTube with skateboarding cats and other such content. It now has content credential in spades.

“Google certainly flexed their ‘influencer’ muscles and showed that some of their YouTube talent are stars in their own right, with engaged and loyal audiences - some queuing from 6am to catch a peek of their favourite YouTube stars,” Bailey said. “The trick will be how to tap into that talent to not only communicate with a brand’s customers and consumers but to add value and customised experiences.

“We are in the experience business now not just the communication business. This is where I find the prospect of working with YouTube and its stars really exciting.”

While a lot of Google’s focus has been on media agencies, creatives need to be on side too. Jules Hall, founder of The Hallway, reflects on the opportunity for creatives to ‘reinvent’ the way they connect brands and audiences.

“We are clearly at a major pivot point in the world of advertising. YouTube is a channel that will always be part of the broader mix,” he said.

“The numbers are so strong, we know the content is awesome, we got an insight into the kind of content that’s succeeding and it’s underpinned by big numbers, so, as creatives we are going to have to think differently to make the most of that channel.”

So, while Google certainly impressed the audience of 1000 or so agency execs and clients, there are some doubts remaining about how agencies fit into the picture.

“Through this more collaborative, branded play, I was left wondering what role media agencies would play in the process,” Moran said.

“We’ve traditionally been the glue that connects YouTube with brands and advertisers, whereas what they were presenting was more of a direct approach and moving away from reservation-type buying to a more integrated solution.”

As well as performing for fans, a number of YouTube stars addressed the corporate audience.

Of those, Canadian comedian Lilly Singh, who has a psychology degree and more than six million fans on YouTube, gave the most business-like presentation, warning marketers that they “risk losing relevance with a generation that see YouTube as their go-to destination”. Darren Needham-Walker, head of marketing, printing and personal systems, HP South Pacific, was there to provide the advertiser perspective and outlined that despite being one of the top computing brands globally, it had a perception problem with millennials. It has since worked with YouTube and creators, Troye Sivan, Tyde Levi and SketchShe, to create a series of videos and content that has turned perception around.

“The more we lean out to creators, the deeper the engagement we have,” Needham-Walker said. “YouTube has enabled us to develop genuine relevance – it’s marketing gold.”

As well as rolling out its flamboyant and distinctive stars, Hewlett-Packard’s (HP) South Pacific marketer also took to the stage to promote its successes and experiences working with YouTube.

Speaking to AdNews, its head of marketing, printing and personal systems, Darren Needham-Walker, discussed the the shift of moving into a digital-first strategy and what he constitutes as “marketing gold”.

HP has increased its video budget by 50% year-on-year and has pulled the budget from traditional channels. There is a trade-off between traditional and digital Needham-Walker says and when focusing on its millennials’ audience, HP uses digital avenues, but when it is pushing a product to appeal to all demos, it will revert to traditional channels.

Behind the decision to up-weight its online video investment was the ability to have “real-time” access to the customer, as well as real-time analytics for performance so it can see how campaigns are working – allowing them to “optimise on the fly”.

“That takes a shift in creative and a shift in accountability and measurability of the campaign” Needham-Walker explained.

Needham-Walker said once HP started to create its own content with YouTube ‘creators’ as the mouthpiece, it soon became clear that production costs were far lower than traditional TV ads, and the engagement greater.

“You don’t need to spend as much as on a TVC,” he explained. “You can get some really clever creatives, which we’ve been very fortunate to work with, so we have then been able to create things with YouTube and digital in mind, and we’ve actually been able to then take it broadcast.

“Shoot it once, use it many times - as we developed and matured with the platform, our planning and creative process then changed as well. We built and created it for digital, but used broadcast as as a supplementary.”

So who is its audience and what is the marketing holy grail? “Our marketing gold is to ensure we have continued increased consideration for our brand, primarily with millennials, while not alienating our traditional customer. “That’s a big task - it’s a balancing act.”