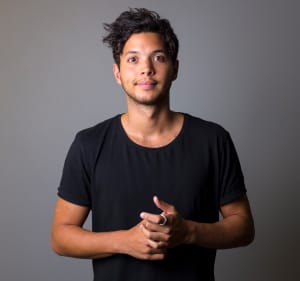 Our Young Guns profile takes a weekly look at some of the young talent aged 30 or under across the advertising, ad tech, marketing and media sector in Australia. It aims to shed light on the varying roles, people and companies across the buzzing industry. Last week we spoke to Fairfax senior native brand specialist, Kathryn Wills.

This week, we head to Sydney to speak to MediaCom strategy director David Toussaint.

I’ve been with MediaCom from the beginning, except this is my third office – Melbourne, London and now Sydney. One of the benefits of Mediacom is the opportunity to work across different markets.

At university, playing music in a Melbourne dive bar. They didn’t have the heart to tell me what I now know. I can’t actually sing or play guitar, and my hands are made out of broken terracotta pots – so I called a recruiter and asked to go into advertising with the rest of the failed musicians.

That there would be a bunch of fat white men in shirts lunching all the time.

Luckily, the industry is changing. There is definitely more of a focus on getting people in with different backgrounds, views and experiences. Not one member of my team was born in the same place, studied the same thing, or is in a syndicate that owns a racehorse – and that’s fantastic.

How would you describe what the company does and your role involve?

Solves business problems through the lens of communications. I help find out what those problems are amongst a plethora of information and set a game plan to solve them.

You can forge your own path. It’s not the same industry it was a year ago, let alone what it could turn into in a years’ time.

When I started, I was in an implementation role and quickly racked up the most account queries in the history of the company. I was nervous, I had the CFO sending me angry emails and felt useless. It took a strong mentor to help me establish what I wanted and what my skillset was to move me into a creative role where I felt I could add value and step into my own. Shout out to Fi Meldrum for encouraging weirdness.

If I had to move, it would be to an MBA (MediaCom Beyond Advertising), the people who put the content in our content and connections. They’re superstars who demand the focus of MediaCom globally for constantly taking on jobs and projects that would have traditionally gone to creative agencies and smashing them.

Flux. It’s an industry where anything can happen and change in an instant based on a new way of thinking or a development in tech.

To be completely honest I have to say that I personally don’t worry about communications and advertising’s future. I know it’s a very popular conversation that very smart people like Willie Pang our CDO are working on, but it’s not for me.

It’s like the creative vs media hoopla that people get stuck on, I don’t see the point. My concern is doing great work in the immediate future based on the current setting we are in. And it will be the same focus based on whatever has changed, and whatever has been invented in the “future”.

Mike Deane, our head of strategy who also let me live in his house in the UK when I had nowhere to live. Also Fi Meldrum in the Melbourne team, who got me into strategy and told me where to find a $1 slice of pizza in London when I was cold, poor and hungry.

I want to be the head of Global Creative Solutions, a team that doesn’t exist yet. GCS would be a crackpot team of strange people from different backgrounds who solve business problems through creative and comms and have a generally good time in life with a respectable collection of hats and jumpers.

People talk about diversity a lot now, but I’m not sure many large organisations are actually taking notice. That’s a big question though.

Douglas Adams, who could observe the world and see the humour in the simple day-to-day.

I have a deathly hallows tattoo andI’d trade them all in for a Hogwarts letter.

Skittles Leak – and for the life of me I don’t know why.

I got into advertising/ad tech/marketing because: