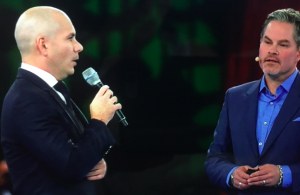 Don't over think it. The 'I Know You Want Me' singer shares his marketing thoughts.

When quizzed on stage at Dreamforce by chief strategy officer at Salesforce Marketing Cloud, Jon Suarez-Davi, in response to a question about what’s leading a revolution in marketing, Pitbull, whose real name is Armando Pérez, said it solely comes down to the brand’s core offering.

“Creating a meaningful relationship, bottom line, has to do with the product”, Pitbull said.

“The product has to be genuine, something that you had to build organically for the consumer, who then becomes a fan - and once you have a fan, that then creates longevity.”

Pitbull, who is a brand ambassador for Norwegian Cruise Line and has inked partnership deals with the likes of Bud Light, Dr Pepper and Kodak, said it’s these business relationships that has allowed him to see and understand how these companies were trying to engage with consumers.

Pitbull who is a brand ambassador for Norwegian Cruise Line

Fans will fight for a brand

He said he’s come to understand what it means to develop a product that people not only enjoy, but standby and then ultimately fight for.

“You can have data, analytics or instant gratification - like when it comes to all these things we’re pushing on all these [social media] platforms right now, but that’s nothing folks – and I’ll repeat this once again as there is nothing, nothing like word of mouth,” he said.

“When someone comes to you and says ‘hey, you gotta listen to this guy or you gotta check out his company that is the ultimate. That’s when you finally cross over to having a fan.”

From sitting in on business and marketing meetings Pitbull said he learnt a lot.

Pitbull, who has helped support charity initiatives by building schools, said his learnings from working with brands has helped him understand what it meant to have a ‘true partnership’.

He said with Norwegian Cruise Line they sat him down, asked what experience he wanted to give fans, listened and they worked together during highs and lows – such as during hurricane disasters.

*AdNews traveled to Dreamforce as a guest of Salesforce.