What a wonderful world: Welcome to the bite-sized future of entertainment 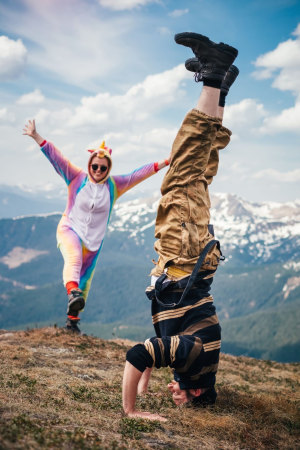 Since launching two years ago in Australia, TikTok has quickly grown to be a community entertainment platform, with the platform's rapid rise in popularity partly driven by it becoming a creative outlet for the world. This new form of creativity is unlike anything that's been seen before.

On TikTok, creativity has been democratised. All users and brands are created equal and have access to the same tools easily made available through the app. This makes it easy to create content on the platform and make it so unique, as anyone can participate.

Over time, our communities have taught one another how to create for our platform. As a result, every day, the limits of creativity and entertainment are being pushed.

It has created a new world of entertainment.

In this new world, the experience is entirely cinematic, fitting in the palm of your hand. This new world is short-form and means Aussies can discover more with each session they spend on the platform.

Authenticity rules this platform, so brands should listen up here and take note. In fact, 60% of TikTok users felt a sense of community while on TikTok. While three in four users say TikTok is a place where people can openly express themselves. This world is perfectly imperfect, and that's what people like about it. For brands, this presents an opportunity to connect authentically with their audience by creating content that shows their values. We know users are doing it, so brands should be as well.

Inspiring uncommon connection
TikTok is entertainment that connects users to their unlikely interests. We've seen countless examples where users have found all sorts of different passions and subsequently the people behind those passions. The magic of TikTok is from discovering something wonderfully unfamiliar. Passionate about plants? Focused on fitness? Crazy about clowns? The worlds of #planttok, #fittok, #clowntok, and many more are waiting for you.

Those worlds aren't exclusive, anyone can join, and they are being discovered and influenced by the other communities around them. In these new worlds, discovery is powered by the content that a user likes and isn't limited by the people they know. These groups are forming through and organic connection on our platform. That's the beauty of the For You page.

This means anyone or anything has the power to be discovered and go viral. Because these worlds or channels aren't exclusive, creative and content will rise to the surface.

Marketers have traditionally lent into their verticals to reach consumers, however those who buck this trend and thinking outside the box on brand partnerships are seeing success on the platform.

For many brands, partnerships are a fantastic approach to show in surprising ways. They are an avenue to be felt across various audiences on the platform and generate community-powered growth. A clear example of this is a partnership between ELF Cosmetics and Chipotle where they launched a "Mexican Fiesta" make-up range. This was a bold partnership that was an instant success on the platform as it surprised both communities. What marketer does not want to surprise and delight their audience?

These two brands came together to release four limited edition products, including a Chipotle Eyeshadow Palette with matte and shimmer pigments that mimic the earthy tones of a burrito bowl. The brand then remixed its already TikTok famous song track, "Eyes. Lips. Face. (e.l.f.)", to "Eyes.Chips.Face" to drive awareness of this collaboration. Featured as part of the activity, was iconic drag queens Trixie Mattell and Kim Chi.

The goal of this campaign was to reach new audiences. By leveraging the drag audience and Chipotle's brand recognition, ELF was able to speak directly to the LGBTQ+ community and those interested in drag culture. Also, by making the products vegan, it connected the sustainability community. For Chipotle, this partnership continued to keep the brand relevant and relatable with multiple audiences.

The power of sound
When did it become the norm for brands to be on mute in the mobile world? Sound is a powerful tool in not only driving recognition of a brand but bringing attention to it in the first place. Humans are wired for sound. It drives both our mood and our memory. The right track can make you feel.

TikTok is born from sound and music is a massive part of the experience. At any given moment, songs that are high on the charts happen to be top sounds on TikTok. Unknown artists or long-forgotten songs have shot to international stardom based on viral TikTok sounds. Billboard magazine described TikTok as "an audiovisual force that hasn't existed... since MTV first landed on the moon in 1981". Nearly 90 songs that trended on TikTok in 2020 climbed into the US Top 100 chart. Fifteen of those reaching #1 on the Billboard chart.

Sydney-based artist Masked Wolf is the perfect example of this, as his song "Astronaut in the Ocean" was recently in the top ten of both the Billboard chart in the US and the local ARIA chart. His tune was released in 2019. However, it has had an unprecedented rise due to his popularity on TikTok, peaking at number four on the local charts, as it was used as the backing sound to a trend of people doing superhuman things caught on camera. This surge has given the song new life, resulting in over nine million listens on the platform.

TikTok is clearly driving popular culture every day, so marketers should be looking to capitalise on these trends and the popular songs on the platform to reach new audiences. Innovative brands have successfully used sound in their marketing campaigns. Kia did just this with its recent TopView campaign.

The campaign was centered on a custom song, "About this Thing", by the electronic act Young Franco, who remixed his song to the TopView to life. The content was fun, catchy and sparked a lot of excitement around the creative.

The goal of this campaign was to put Kia top-of-mind with the next generation of drivers when looking to purchase a new car. Kia leveraged TikTok's unique creative execution and utilised our signature TopView solution to capture the attention of the TikTok community and show its product as stylish and fresh.

Kia was the first auto car brand to run an independent TopView campaign in Australia, outside of a Branded Hashtag Challenge, which marked a significant milestone for Kia and TikTok.

The strategic placement of Kia's TopView drove incredible results. With an engagement rate of 16.52%, the campaign outperformed multiple benchmarks and further highlighted the power of TikTok's highly engaged community.

Come to disover, stay to create
TikTok is built for creation, and the platform not only inspires creativity, but enables it. Users have access to all the tools and the props to let their creativity run wild: special effects that stop time, change backgrounds, or augment voices. Collaborative tools, like duet and stitch, give people the chance to connect through reacting, remixing, and co-creating. TikTok is also easy to use. Everything a creator might need to shoot and edit is directly built into the app and can be used on a mobile phone.

We know creators are drawn to TikTok for its authenticity, as it's a platform where they can be themselves and where they can be seen and discovered. In the world of TikTok, there is a place for everyone and every story. Beneath each world is a connected community of people discovering and creating.

That means there is an opportunity for brands of all shapes and sizes to tap into this new world of entertainment. Marketers can bring existing work from other worlds here or borrow from the voices powering TikTok to create something entirely new.

Last Christmas, The Body Shop, launched a campaign on TikTok in partnership with Launch Housing leveraging the duet challenge by featuring Gypsy Woman (She's Homeless), a song about how homeless women are the same as everyone else from The Voice star Siala to raise awareness of the societal issue of homelessness. This was the first time a Branded Hashtag Challenge was used for charity purposes in Australia. Siala had experienced homelessness first-hand, having lived with her mum and siblings in a women's shelter due to domestic violence. The Body Shop chose to use TikTok as a channel as it spoke to its target audience of bright and ethnically engaged young Australians in an authentic way.

For brands, these new modes of entertainment are just the tip of the iceberg, as new TikTok communities are constantly showing up on the platform. This means, the opportunities are endless, as Aussies continue to discover and play on our platform. Smart brands should be looking at these new areas as channels to show up authentically on our platform and connect with our audience.