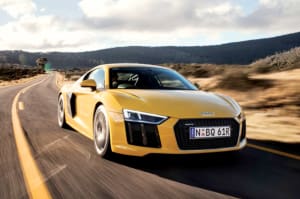 "When it comes to Australia, from a technology point of view, we already have it. The infrastructure of the country just needs to match up."

This first appeared in AdNews magazine. If you want to read it hot off the press, you'd better subscribe here.

Fresh from a multimillion dollar sponsorship deal and marketing push, Audi has its sights firmly fixed on the future. From industry disruption to the carmaker’s local focus , Sarah Homewood chats with Audi Australia MD Andrew Doyle and marketing GM Kevin Goult about how the German luxury car brand is more tech than automotive.

It’s no secret the automotive space is experiencing what the finance and media sectors have been grappling with for the past few years – technology and changing consumer behaviour dramatically altering the game.

Instead of just being vehicle manufacturing giants battling it out with other carmakers, now automotive brands are competing with the likes of Google in developing driverless technology, as well as dealing with the ‘uberisation’ of their business. Car sharing startups such as Car Next Door and GoGet are changing the way consumers view car ownership and their need for vehicles – something automotive brands are keenly aware of.

However, these changes are only one piece of the puzzle for the local offering of the German car giant. Technology and disruption are things the organisation is injecting into all its processes, from engine technologies and training staff to how it markets the models.

Electric vehicles are one element of the future of automotive and Audi has plans for a fully electric car in the Australian market by 2018.

Managing director, Andrew Doyle, explained this is a focus of investment at a global level.

But, the roadblocks to it becoming mainstream are legislation and infrastructure in Australia, which Doyle said is way behind other countries.

“It’s starting to come about now a few states are starting to ask a bit more about it. Audi is in a good place globally and when it comes to Australia, from a technology point of view, we already have it; the infrastructure of the country just needs to match up,” he added.

General manager of marketing Kevin Goult has a simple but clear understanding of Audi’s position.

“We’re a car company, but we’re a tech company because of what our cars do. We are a tech company that happens to make cars,” he said. “If you’re slow to adapt, you’ll always be a follower. Not only do we design our cars with the ‘Vorsprung’ [leading] spirit, it’s exactly the way we do our marketing.

“If we sit down and say, ‘let’s sit back and do it how we’ve always done it,’ it won’t keep up with the cars. Automotive technology is growing at such a fast rate and we have to communicate that in the same way.”

The luxury brand space is extremely competitive, with Audi, BMW, Mercedes–Benz, Lexus and Volvo, just to name a few, going head-to-head every month and every year to be at the front of consumers’ minds.

The VFACTS new car sales numbers for the Australian auto industry May 2016 saw Toyota as a top seller, with the brand selling 17,201 vehicles.

Toyota was followed by Mazda and Hyundai, with the brands selling 9608 and 9005 vehicles, respectively. The numbers also showed that sales of luxury vehicles jumped, with Mercedes–Benz selling 3373 vehicles, a rise of 22.5%. BMW sales also increased by 7.8%, with 2565 cars sold while Audi’s sales totalled 2002, a lift of 3.6%.

When it comes to what each brand is spending on media, Nielsen put BMW at the top of the list for the period May 2015 to April 2016, forking out $19.2 million on media. Mercedes-Benz came in second at $17.6 million during the period while Audi spent $15.8 million.

Audi recently rolled out a multimillion dollar marketing push that includes a sponsorship of AFL team, Hawthorn Hawks. The seven figure deal and its content are designed to get Audi in the spotlight for its sports cars and sub-brand Audi Sport as well as communicate the car maker’s broader brand message and create a halo effect.

The brand has taken a different tone with this activity than in other marketing to “create and be what people are interested in,” according to Goult who said the teams wanted to try “something different”. Audi’s sponsorship of the Hawks saw the brand creating content for YouTube as well as launching a big above-theline push that used the players and their skills to sell the spirit of the brand.

“It’s very easy to just distract people and offer ‘another message’. But rather than distracting, we want to be interesting. That’s really what changes the way and tone in which you communicate,” he said. “We can always talk about the four wheels, steering wheel and some windscreen wipers, but we wanted to be more engaging and tell people why and what they can do with the product. That is the success of marketing now, which is making us so much more engaging than a traditional car ad.”

The car brand has also set its sights firmly on the collection of data. With the pathway to purchase shrinking in the luxury space, Doyle revealed that nowadays the first dealer a consumer encounters is likely to be the person they will buy their car from. So brands like Audi need to use data and mobile technology to get consumers through the door and ready to put their hands in their pockets.

“The buzzword a little while ago was ‘big data’ and for big data to work you need little data – that’s what we’ve been focusing on,” Goult explained.

“The path to purchase has gotten shorter, the challenge for us, or the advantage for us is the touch–points have gotten more frequent. There used to be a dozen touch–points, now we’re up to 20 touch–points.”

Audi is using techniques on mobile that allow consumers to show an image of their new car on their own driveway before they own it. This is so they can decide which colour goes best with their garage door or garden – it’s these types of innovative techniques the brand hopes will get consumers’ attention.

“Smartphone consumption for car buying is almost at the point where it’s overtaking desktop. Really the smartphone is everything for these customers,” Goult said.

The car maker spends about a third of its Australian marketing budget on digital, with that being towards the top end of the parameters set by global marketing, due to Australia’s high smartphone penetration.

Goult said his perspective on the role of a marketer is to be focused on brand rather than just customers who are in the market to buy a luxury car right now.

“Building a great brand is what’s going to build your success. Only 5% of the market are looking to buy a car at any one time. If you only focus on that sales funnel you’re not catching that broader audience,” he said.

“We’re a relatively young brand in Australia so that’s very important for us. We need to fill he top end of the traditional marketing funnel with the information, with the brand awareness and getting people to be inquisitive about our product. If you’re just focusing on the bottom end of the funnel you’re not building your brand.”

Goult explained that marketing is as competitive as ever in every category, with Audi setting itself the goal of doing the most innovative work it can in every channel.