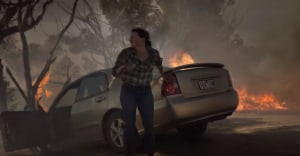 Complaints about these community service messages had raised concerns about graphic images of burnt animals and abandoned pets.

It included news footage of a koala being rescued after mistakenly attempting to return to an area of bushland that was on fire.

A volunteer was then shown rescuing the koala and administering aid in the form of dousing it with water and sheltering it with her own shirt.

Further footage included vision of bushland totally engulfed in flames and vision of firefighters responding to blaze in a residential area.

The advertisement contained graphics throughout providing viewers with details on how to donate to the bushfire appeal.

Complaints made said the ad was in breach of the Australian Association of National Advertisers (AANA) Code of Ethics, section 2.3 on violence.

"Graphic images of a koala being burned alive. There was no warning given that these horrific images would be shown."

"It made me feel sick and the appeal isn’t even relevant to animal welfare like a RSPCA appeal for example, they’re advertising an appeal for people and using those distressing images to reel in cash and attention. Despicable."

The Ad Standards Community Panel acknowledged that the content and subject matter of the advertisement would be upsetting to some viewers, including children, but considered that the advertisement is using factual information in an informative manner to raise awareness of an issue and includes a call to action.

It said the overall tone is to encourage donations to the charity so that it can assist bushfire victims and in its view the overall impact of the advertisement is justified by the content of the service advertised, dismissing the complaints.

The second ad was by the Department of Justice and Community Safety in Victoria.

This television advertisement portrays firefighters and bushfire survivors gathered in a community centre in rural Victoria reflecting on their shared experience.

It includes flash back scenes of three fictionalised stories.

Complaints for the ad were also made under AANA's Code of Ethics section 2.3 on violence.

"IT’S …TRAUMATISING!!! As a bush fire survivor when my family wasn’t, I am REPEATEDLY re-traumatised by the insensitivity and graphic nature of the ads. I can not watch TV now, again."

"I object to this add due to the grafic nature. My 6 year old and 10 year old were both in tears and terrified. Not suitable for young children."

While it acknowledged that the content and subject matter of the advertisement would be upsetting to some viewers, including those that have experienced bushfires, the Ad Standards Community Panel considered that the advertisement is depicting realistic scenarios which is focused on raising awareness of the need to prepare for bushfires and not be complacent.

It found the depictions in the ad were justified by the important public safety message which the advertiser is seeking to get across and dismissed all complaints.