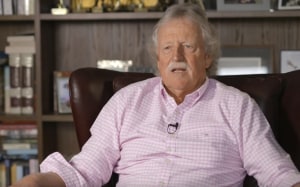 Des Speakman knows a lot about leadership, having run the Campaign Palace in Melbourne in its hayday before taking the CEO role at Whybin/TBWA and latterly working as CEO of TBWA until 2001.

Throughout his career, he oversaw some of Australia's most iconic advertising including Up Their Cazaly for AFL and Westpac's Olympic spot from the 2000s and grew The Campaign Palace billings in excess of $200 million during his tenure.

At the height of his career, he managed agencies of up to 250 people and while he didn't always get it right, Speakman said he learnt along the way the importance of culture, providing a company vision, setting goals for staff and finding a mentor.

"One of the greatest challenges that we've got today is a failure of leadership in so many different areas, but what great leadership does at its best is provide a vision and then build a set of values and behaviours that drive the business inexorably towards achieving and realising its vision," he said, in a video interview broadcast at AdNews Lessons in Leadership event.

Reflecting on his time at The Campaign Palace, Speakman said he was fortunate to be their during its "halcyon days" and is proud of the legacy it left behind.

"Anyone that goes and looks at The Campaign Palace's history reel can't fail to be unimpressed," he said.