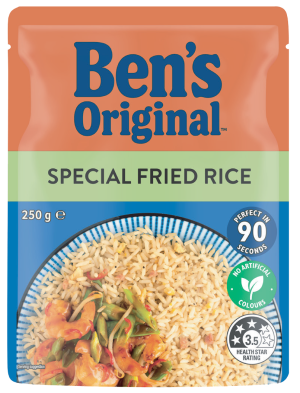 Mars Food has announced a campaign for Ben’s Original rice products -- a rebrand from Uncle Ben’s to get rid of any hint of racial stereotyping -- supporting their arrival on supermarket shelves in Australia.

The Everyone’s Original campaign focuses on the brand’s vision of inclusivity that celebrates individuality.

“As part of today’s announcement, Ben’s Original has shared its new brand purpose and a commitment to invest a proportion of profits over the next five years to support disadvantaged communities in Australia,” Heague says.

“This is not just a name and packaging change. We believe everyone deserves to feel welcome, heard and have access to nutritious food.”

Heague says the funding initiatives will “offer everyone a seat at the table”.

“We are currently in discussions with a number of community groups in Australia and we look forward to announcing a new partnership early next year,” Heague says.

The campaign includes creative developed by The&Partnership which will also air in the US, UK, Germany, Canada and France as part of the brand’s first global marketing campaign. It went live in Australia on September 22 with online video, social and in-store promotions.

The new packaging for Ben’s Original Ready to Heat Microwave Rice includes the Ben’s Original brand name which is featured on the familiar orange background with the same navy-blue font.