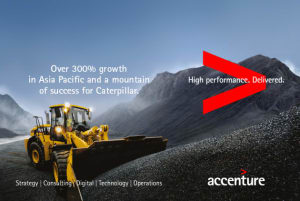 Accenture’s chief marketing and communications officer Roxanne Taylor says in teaming with UM, it will use “bold, innovative ways”, across a range of platforms and channels, to reach and engage clients, recruits and Accenture people around the world.

“Making meaningful connections demands responsiveness - offering the right information and insights when, where and how people want it,” Taylor says.

Nielsen reports Accenture's media spend in the past 12 months in Australia to be $277,000.

UM, which believes that ‘better science and better art deliver better outcomes’ to its clients, describes itself as a creative media agency locally, is headed up by Ross Raeburn, who joined in 2015 after a four-year stint as MD of Soap.

The move, reported in the UK's media and marketing publication Campaign, is said to be motivated by discussions around programmatic trading, including concerns about transparency and fraud in the digital media supply chain – concerns reiterated in a strongly-worded comment piece by AANA CEO Sunita Gloster.

Accenture Interactive confirmed to AdNews its programmatic service offering will be rolled out in Australia and we spoke to media agencies to garner views.

Many said its major challenge in establishing a programmatic service offering will be finding the highly specialised talent required to help clients in-house and manage their trading desks.

“They are probably thinking because they're transparency experts they can create a whole new notion about trading desks for a client but I think this could put the industry a couple of years back,” said one media exec. See here for: Media agencies: 'Accenture's programmatic play boils down to talent’.

The in-housing of programmatic trading is by no means a new concept; media agencies have seen several clients attempt it to varying degrees of success in recent years. In fact agencies often help clients make this transition.