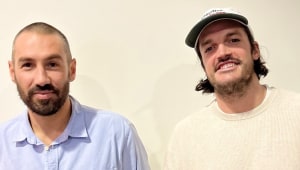 The ad, by creatives Brendan Day and Benny Moore, imagines the scene of a frantic warehouse worker, without first aid skills, discovering an injured colleague.

The Sirens Council selected the 30-second ad as the best single ad and overall winner of the round. Studio engineer Stephen Renfree from Bang Bang studios also won the craft category for the ad.

Day and Moore said: “When something happens, first aid is the difference between knowing what to do next or not.

“The ad comes in late. Instead of establishing a scenario or wasting time with what happened to the victim, we open with the responder screaming at the top his lungs for help.

“And by underwriting the script we get to sit with his emotion and feel his hopelessness over the next 25 seconds. We let the audience’s imagination do the rest.”

The ad is now in the running for the 2023 Gold Siren Award for best radio ad, with the major prize a trip for the winners and their client to the Cannes Lions International Festival of Creativity.

Congratulating Town Square, Commercial Radio Australia chief executive officer Ford Ennals said: “The winning ad brings a hard-hitting message to radio audiences on how important it is to be able to save a life in an emergency.

“Town Square’s ad is an outstanding example of radio as an effective medium for creative storytelling, which is what the Siren Awards are all about. The benchmark is already high in Round 1.”

The Siren Awards are run by CRA to recognise outstanding radio advertising and are judged by industry experts across five rounds throughout the year plus a final call round, the other winners are as follows.

Sound engineer Myles Lowe from studio Song Zu picked up a highly commended in the craft category for the ads.

Kevin Pease, Sean McNicholas, Lewis Farrer, Pete Sherrah and Lee Spencer, creatives from The Royals, were highly commended in the single ad category with “Only Five Likes” for the brand Satisfyer.

Creatives Pete Laurie and Matthew Redmond from SCA Melbourne were also highly commended in the campaign category with radio ad “Don't Miss a Minute of the NRL” for their client Doordash.

Winning entries from each round are entered into the 2023 Gold Siren Awards, with the winner to be announced in May 2023.