The Voice down on last year, dents MasterChef 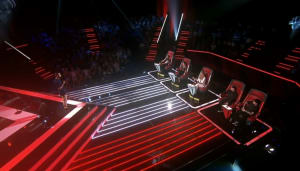 The new season of The Voice has debuted with a five-city metro average audience of 1.56 million, down from last season's 2.155 million, but still taking share off Ten's MasterChef.

Premiering at the 7.30pm timeslot against Ten's MasterChef and Seven's House Rules, it managed to carry the night for Nine, which won a 30.7% share against Seven's 28.4%.

Nine managed to build the momentum into its 60 Minutes interview with Belle Gibson, with 1.07 million metro viewers sticking around after The Voice.

The Voice's debut took share off both House Rules and MasterChef, although it appears The Voice's appearance on the schedule affected MasterChef more than it's Network Seven counterpart.

While House Rules managed to post more than a million metro viewers with 1.02 million tuning in, only 879,000 watched MasterChef on Ten.

Last Sunday MasterChef had an overnight audience of 1.21 million, and House Rules brought in 971,000.

Ten finished with an audience share of 18.7% for the evening, with the ABC bringing in 16.4 points with SBS posting a share of 5.8%.