The remarkable rise of eSports: A golden opportunity for brands 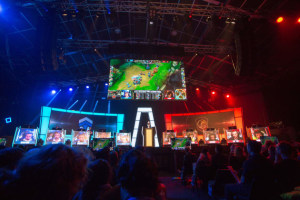 The Oceanic Pro League grand final is one of the largest eSports events in Australia.

Companies and media agencies have long appreciated the value of advertising to the gaming community, but a recent evolution has opened a new world of opportunity to brands.

Although in-game advertising has rapidly grown to become a $7 billion industry worldwide, the smarter money for brands is on out of game sponsorship eSports, tapping into a thriving and highly-engaged community of 120 million fans.

There is a comprehensive calendar of professional video game tournaments across the world with the largest attracting live audiences in excess of 100,000 and offering prizemoney of $17 million. More than 32 million people game regularly, and a fraction turn it into a career, with Korea the leading nation.

The tournaments are regularly watched by fans numbering in the millions on online channels, pay TV and the popular gaming social network Twitch. The most prestigious eSports tournaments have larger global viewing audiences than traditional sports, including the NBA finals.

There are also a handful of non-endemic global brand partners, including Coca-Cola and American Express (see below).

In Australia, eSports has 1.5 million fanatical followers, which is about one-third the size of Australia's most followed sport, cricket, and on par with golf, netball, horseracing and cycling.

Gemba's Andrew Condon, an authority on sports and entertainment marketing, tells AdNews that eSports now provide the "strongest platform" for brands in Australia to market their wares to millennial males, particularly those aged 18-25 - despite Australia being much later to the eSports party than Europe, East Asia and the US.

"It's emerging here (see OPL pictures below for proof), I wouldn't say it is yet established. Organisations like Riot Games are creating leagues and taking what is a global phenomenon and localising it really well," Condon says.

"We saw it coming up in our research about 12 months ago as a compelling marketing proposition and I think it will only grow from here. Platforms like Twitch make it widely accessible, which is often the barrier to a lot of emerging sports."

Condon says brands chasing a young male demo with high disposable income would be well advised to consider backing eSports as it is developing in Australia.

"This is particularly for those who move early and take advantage of being one of the first brands to genuinely get involved,” he says. “They will get brand credit and additional advocacy for taking a leap of faith.

"The cost of entry will probably depend on the quality of asset you want to buy, but it will be a far more cost-effective and efficient exercise in terms of cost per thousand than most traditional sports."

This year many brands will jostle for a piece of the Rio Olympic Games pie. In future years, it is conceivable that instead of sponsoring a Usain Bolt, brands could put their money behind electronic superstars like Faker as eSports popularity sits alongside its more traditional counterparts.

An eSports fan is more aligned with the stereotypical image of a gamer when compared to the overall gamer population (this broader definition includes mobile gamers). According to Nielsen US research, 78% of eSports fans are male and 54% are aged 18-34. Comparitively, 54% of all gamers are 54% with about a third in the 18-34 demo.

Another trait for marketers to be aware of is that eSports fans tend to have higher disposable incomes. The mean US household income for eSports fans is $64,900 compared to $58,900 for all gamers - the average in the US is $52,500.

A higher proportion of eSports fans are Asian (11% vs 5%), which can be explained by the huge popularity of gaming in East Asian nations.

How to get in the game

The majority of eSports fans watch competitions through online streaming. The most popular platform is the social network Twitch, which has numerous channels that fans you can follow or create. It's essentially one-stop shop where content broadcasters socially interact with fans - like a live YouTube platform with a chatting compenent.

Fans are most favourable to brands that provide products, prizemoney and equipment to an event. Fans also respond well to brands that sponsor events, live streams and run competitions. In other words, those that support eSports events and gamers in a meaningful way.

Australia's top pro gamers battle for the Oceanic Pro League grand final, the ultimate prize in this country for League of Legends gamers. Here are some images of the event. which was eventually taken out by Derek Trang's (pictured) team, the Chiefs who beat Legacy. All photos are by Andrew Lin.