The QR code infiltrates cricket via McDonalds and Toyota 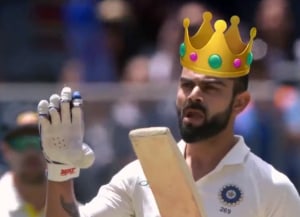 The QR code takes on cricket.

Fans then scan the QR code using their smartphone cameras and are taken to a landing page or app.

This technology was rolled out at the first ODI match which took place on November 27 at the Sydney Cricket ground.

So far, the QR codes have been used at five matches, resulting in more than 190,000 scans.

The McDonalds QR Code ran across the first two T20 matches on December 4 and 6, with a cash giveaway competition activated via a landing page.

The Toyota QR Code ran on the second T20 match. When fans scanned the code, they were sent to the Good For Cricket web page where they could learn more about Toyota’s Good For Cricket raffle and purchase tickets.

Despite a loss for Australia, the second T20 match has just taken the top spot as the most watched cricket game on subscription television (STV) with an average audience of 623,000 across Foxtel Platforms and Kayo.

This surpassed the 586,000 viewers who tuned in for the second Australia vs India ODI match on November 29.

The series as a whole is averaging 603,000 views per match with the final game being played on December 8. These viewing figures are up 49% when compared to the 2018 T20 series against India.

"Each event seems to be outdoing the other- starting with nail-biting ODIs and thoroughly well fought T20s. I can only imagine what the Big Bash games will bring this week. It’s shaping up to be a great year for cricket.”

Foxtel platforms and Kayo are exclusively bringing fans a blockbuster summer of cricket with the first of 16 Big Bash League games due to start December 10.

Matt Weiss, General Manager of Fox Cricket: “At Fox Cricket, we love innovation and the fan reaction for our QR code roll out has been incredible. We are excited to have partnered with McDonalds and Toyota in this world-first technology venture and provide audiences with an additional level of engagement in their viewing experiences.

"We look forward to the other exciting possibilities we may be able to deliver in this format as the technology evolves and grows.”