The Monkeys show how Australian Beef can help 'Feed Your Greatness' 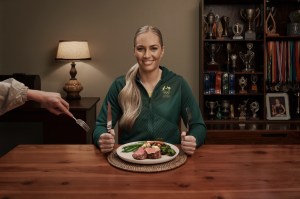 Australian Beef has launched a new winter campaign with reigning world champion Javelin thrower, Kelsey Lee-Barber, by highlighting that beef is packed with protein and makes the greatest healthy meals, not only for athletes, but for everyday Aussies too.

The TVC, created by The Monkeys part of Accenture Interactive and directed by Trevor Clarence, imagines Olympian, Kelsey Lee-Barber and her younger brother Greg in an epic battle for the last piece of beef at the family dinner table.

Is it a lifetime of training, years of hard work and sacrifice, all leading up to a medal shot at the Olympic Games? Or is it finally smashing your personal best at the local games arcade?

In the ad we see that whatever your personal greatness, you can help feed it from the natural source of iron, protein and nutrients packed into delicious Aussie beef.

“We wanted to show in a fun way that the nutritional benefits of Australian Beef can help you be your best every day and it’s not just athletes that can benefit from that,” The Monkeys creative director Scott Dettrick says.

The integrated campaign highlights Australian Beef’s sponsorship of the Australian Olympic and Paralympic Teams ahead of the Tokyo Games.

"Our partnership with the Olympic and Paralympic Teams allows us to put the nutritional benefits of beef on centre stage, and gives Aussies the confidence to feel good about eating this delicious meat.

"With its unmistakable flavour and superior quality, we’re proud our country produces some of the best beef in the world.”

It will be pushed out across digital, social and retail out-of-home (OOH) channels by UM.

The ad will run on Channel 7 FTA, broadcast video on demand (BVOD) and Twitter for the Olympic and Paralympic Games.

One Green Bean will be driving coverage for the campaign across earned media and owned social.