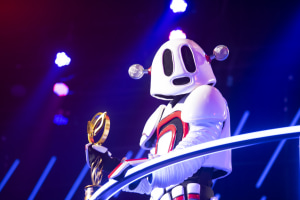 The show, which sees celebrities don elaborate costumes and takes to the stage to perform while a panel of judges tries to determine who is under the mask, has been a smash hit for Ten.

Last night's finale saw the final three contestants revealed, including the winner and former Disney actor Cody Simpson as the Robot, Rob "Millsy" Mills as the Wolf and Gorgi Coghlan as the Monster.

Nationally, The Masked Singer drew a total of 1.87m and 1.4m for The Final Reveal and Grand Finale, which included a further 505,000 and 384,000 regional viewers, respectively.

The show was a success throughout the course of the season, often drawing over one million metro viewers. It also has assisted in growing the audience of Ten's celebrity quiz show Have You Been Paying Attention?, which last night drew 926,000 metro viewers and 1.27m nationally.

Across its season, The Masked Singer Australia achieved a total national average audience of 1.42 million, and a total capital city average audience of 1.09 million. This includes overnight, 7 day timeshift and broadcast video on-demand (BVOD) audiences on 10 Play, making it one of the biggest shows in the second half of 2019.

The average television audience across the season was 1.33 million nationally and 999,000 across the capital cities. On BVOD, the show currently has a 7 day BVOD audience of 68,000.

In the overnight main channel and network battle, Ten won both categories. Ten's main channel had a 20.9% share, compared to Nine with 18.8% and Seven with 15.8%.