The Killing Season kills it for the ABC 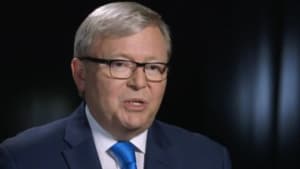 The Labor Party may not like it, but it seems that the viewing public is still keen to rake over the coals of the backroom political drama which was the Rudd/Gillard era, with ABC's documentary The Killing Season almost cracking the one million viewer mark.

MasterChef won the chocolates for Ten with a viewership of 1.14 million being the highest-rating program for the night, according to the overnight preliminary estimates from OzTAM.

However, the political drama was the main talking point for the night, benefiting from wide press coverage of the show to collect 986,000 sets of eyeballs for the ABC.

Interestingly, despite Nine's main reality format Reno Rumble only attracting 667,000 viewers for the evening, Nine managed to win the night with a 26.9% network share, suggesting it's not all about reality for the network with Love Child an ongoing strong performer for the network.

However, both Nine and Seven got bumps from its so-called digital channels, with Ten winning the ratings on a main-channel basis.

It demonstrates that MasterChef is increasingly a winner for Ten, with its second-highest rating show for the evening, The Project, coming in at 12th place for the evening with 736,000 viewers.

Check out the numbers for yourself below.