The Australian Olympians with the biggest social media profiles 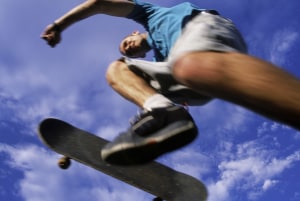 The Australian Olympian taking the biggest social media profile to Tokyo is not a worldleading swimmers. Nor is it Wimbledon champion Ash Barty, footballer Sam Kerr or one of the Boomers basketballers.

The title of Australia’s most prominent athlete on social media goes to skateboarder Shane O’Neill, according to research from media monitoring firm Streem comparing the Twitter and Instagram profiles of Australia’s Olympic team.

Despite appearing in just 49 distinct print and online media items in Australia in the past 12 months - compared to Barty’s 9300 - O’Neill is huge on Instagram, where he has amassed 1.4 million followers.

That is more people than generally visit any individual Australian online news site on a daily basis.

The list sees recently added Olympic sports such as skateboarding, surfing and BMX - which have traditionally struggled for mainstream media attention - come into their own.

There’s no doubt athletes performing regularly on the global stage had a distinct advantage.

But they all fell behind skateboarding superstar O’Neill, whose videos of assorted tricks and stunts have attracted a huge audience.

The list contains 6 women and 14 men. The highest-ranked woman is surfer Sally Fitzgibbons, who is third overall.

A couple of notable omissions from Australia’s Olympics team - Ben Simmons (6.6m followers) or Nick Kyrgios (2.1m) - could have been number-one had they chosen to compete in Tokyo.

But even they would have been dwarfed by swimmer/musician (and one-time partner of Miley Cyrus) Cody Simpson, who failed to make the swim team despite a credible showing in the Olympic trials where he made the final for the 100m butterfly but finished last. Simpson has more than 10 million fans across Twitter and Instagram.

“Instagram and Twitter are the two platforms that most athletes are using to engage with their fans, which is why we focused our analysis on them," he says.

“Of the two, Instagram is considerably more popular, with the top 20 Olympians racking up 8.6m followers there, compared to 2.5m on Twitter.”

Boomers captain and Australian flagbearer Patty Mills had the largest Twitter profile of any athlete with more than 400,000 followers.