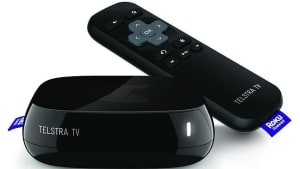 Telstra has lifted the curtain on its Telstra TV device, positioning it as a complement to its existing entertainment services such as Foxtel.

The Telstra TV player is the by-product of a partnership with US streaming company Roku and is a version of its Roku2 player.

On launch – 27 October – several streaming platforms will be available on the device including Presto, Netflix, SBS on Demand, Plus7 and 9JumpIn. Apps will also be available with Red Bull TV, Wall Street Journal and YouTube among those listed.

While Telstra chief marketing officer and group executive media Joe Pollard said that Telstra TV responds to the demand for simple and flexible home entertainment, she said Telstra sees it as a complement to other entertainment assets under its umbrella including Foxtel.

“Telstra TV is a very simple intuitive device that enables consumers to get this plethora of choice in catch TV services and SVOD service and other video apps simply and easily on one simple place on their TV,” Pollard said.

“It's really an entry level pay TV product for people who want to get into pay TV.”

Telstra TV will be available only to Telstra Broadband customers and will be priced at $09 per streaming player or included as part of selected broadband bundles.