Super Bowl ratings down as cricket cuts into audiences 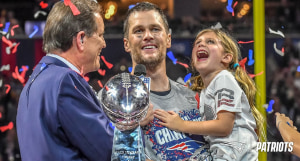 Super Bowl LIII has come and gone, however the clash between the New England Patriots and LA Rams suffered a ratings dip on its free-to-air broadcaster, Seven.

Airing on 7Mate, the at times slow-moving battle between the National Football League's (NFL) top teams were unable to top its 2018 performance, as it moved from the main channel to make way for Seven's coverage of the fourth day of the Australia vs Sri Lanka Test cricket match.

Despite this, the Super Bowl remained the top multichannel program, with its Half Time show featuring Maroon 5, Travis Scott and Outkast, drawing in 209,000 viewers, and its post-game coverage reaching 166,000 viewers.

Overall the game reached 308,000 metro viewers, taking a 33.2% commercial share for the day and notching up 5.6 million streaming minutes.

Seven's coverage of the final Test on home soil for summer drew in 243,000 and 174,000 metro viewers for session two and one, respectively.

"We are proud to have grown the sport in Australia and develop platforms to continue the growth down under," Seven network director of sport sales Patrick Moloughney told AdNews.

Moloughney says streaming via 7Plus desktop accounts for 50% of the viewing - up +60% year on year.

"Seven is accustomed to working with rights owners to continually innovate and build for the future," he adds.

"A wider following and new audience of any sport creates a flow onto viewership. The NFL is no different."

Over on Foxtel, ESPN's dedicated Australian coverage of the game, which featured localised brand integration, as well as a commentary team handpicked for the local market, drew in 130,000 viewers, with its coverage of the final Test coming in a close second with 116,000 viewers.

US ratings take a hit

In America, the game was the lowest rated in a decade and is expected to fall well below last year's average household viewership of 103,390,000.

The slow-moving nature was a heavy contributor to the low ratings, with the game going into half time with the second lowest score in Super Bowl history at 3-0.

The game would take the NFL record for the lowest scoring Super Bowl of all time, with only 16 points in total scored by both teams.

Elsewhere, issues around the New Orleans Saints' absence from the game, after being knocked out the week prior by the LA Rams following a controversial penalty, saw the city produce its lowest viewership ever. Fans of the Saints instead opted to litter the streets of the city in protest.