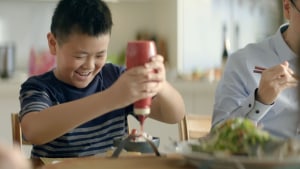 SunRice and Identity, a division of IPG Mediabrands, have won the Business Campaign of the Year at the 2019 NSW Premier's Multicultural Communications Awards.

The campaign challenged stereotypes because it didn’t feature the usual cultural icons of red, gold and ‘8’.

Instead, SunRice the Rice Breaker, depicted a Chinese-Australian family sharing a meal with their local Australian neighbours.

Inclusion was a key message - as a rice brand that is universally appealing, SunRice is able to connect people of different cultures over great food.

“SunRice is thrilled our campaign has been recognised with this award,” says Andrew Jeffrey, SunRice head of marketing.

“The outstanding results demonstrate the crucial importance of audience insights in building authentic engagement with our Asian-Australian customers. The audience insight that Identity Communications brought to the table was invaluable.”

Thang Ngo, managing director at Identity: “From day one, SunRice told us they wanted to build an authentic connection with Australia’s Asian community. The client recognised the importance of developing a robust strategy and bespoke creative.”

Agency Campaign of the Year: Cultural Perspectives – Your Vote Will Help Shape Australia

Voting is a right for all Australians but enrolling, assessing candidates and casting a ballot is a challenge for people with low English language-speaking proficiency. The Your Vote Will Help Shape Australia campaign by Cultural Perspectives aimed to make voting easier and support increased participation by sharing voting information in 30 different languages across print, radio, and online.

AFL NSW/ACT Community Campaign of the Year – Hindu Council of Australia – Deepavali Fair
Aiming to increase Deepavali Fair attendance by 10% to 30,000, the Hindu Council advertised on Hindi satellite television channels, in Indian language newspapers, via social media and through flyers and banners around local schools and major intersections. As well as meeting attendance targets, the Council successfully increased sponsorship revenue by 15%.

Other winners of the 2019 Premier’s Multicultural Communications Awards: