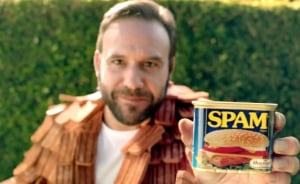 The man in Spam

This is from the July issue of AdNews Magazine. To see it in-print first, and to support AdNews, see here.

Selling the sizzle for the humble lamb chop or juicy snag may be easy, but for a pre–cooked canned meat introduced in 1937 that rocketed in popularity after its use in World War II and shot to iconic status by Monty Python in 1970, it's a different challenge in 2018.

Adding to that, the last time Spam advertised in Australia was in the 2000s and back then it was all around the ‘Spamburger’ hamburger campaign.

Nearly two decades later, the brief for Clemenger Brisbane was to demonstrate the ‘Sizzle Pork And Mmm’ of the Spam brand by showing new ways to cook it, bringing out its taste appeal.

In this feature, we dig into the creation of the ad with the lead agency creative and brand marketer – with news just in, there’s been a product uplift of 8% so far off the back of the quirky spot.

The 'Sizzle Pork And Mmm' campaign came out of the US initially, during the 2017 Super Bowl, with Hormel–owned Spam airing ads focused around the product sizzling in a frying pan.

Clems Brisbane said the agency had to work with the executions it felt would appeal to Australians, which meant selling the sizzle in a local context, which naturally meant centring it around the barbeque.

This first appeared in-print - subscribe to see it first 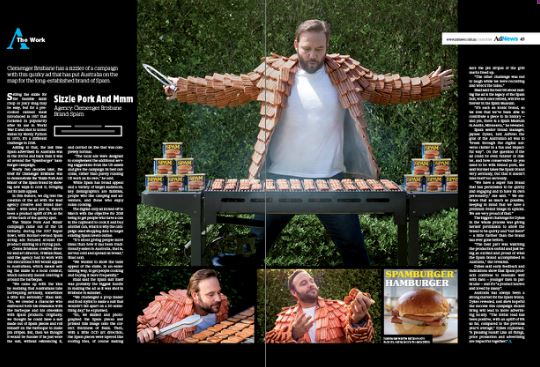 “We came up with the idea by realising that Australians take barbequing seriously, sometimes a little too seriously,” Staal said.

“So, we created a character who embraced both his obsession with the barbeque and his obsession with Spam products. Originally, we thought he could have a suit made out of Spam pieces and roll himself on the barbeque to make pin stripes. But, then we thought it would be funnier if he just wore the suit, without referencing it, and carried on like that was completely normal.

“The local ads were designed to complement the additional serving suggestions from the US assets and give the campaign its best outcome, rather than purely running US work on its own,” he said.

While Spam has broad appeal and a variety of target audiences, key demographics are families, people who like camping and adventure, and those who enjoy Asian cooking.

The digital–only ad kicked off in March with the objective for 2018 being to get people who have a can in the cupboard to cook it and buy another can, which is why the campaign used shopping data to target existing Spam lovers online.

“It’s about giving people more ideas than how it has been traditionally eaten in Australia, that is, served cold and spread on bread," Staal said.

"We wanted to show the taste appeal of the sizzle, in an entertaining way, to get people cooking and buying it more frequently."
Staal said the Spam suit itself was probably the biggest hurdle in making the ad as it was shot in Brisbane in summer.

“We challenged a prop maker and food stylist to make a suit that wouldn’t fall apart on a 30–something day," he explained.

“So, we sizzled and photographed the Spam pieces and printed this image onto the correct thickness of foam. Then, with a little OCD art direction, the Spam pieces were layered like roofing tiles, of course making sure the pin stripes of the grill marks lined up.
“The other challenge was not to laugh while we were recording and wreck the takes.”

The suit will appear in the Spam museum in the US 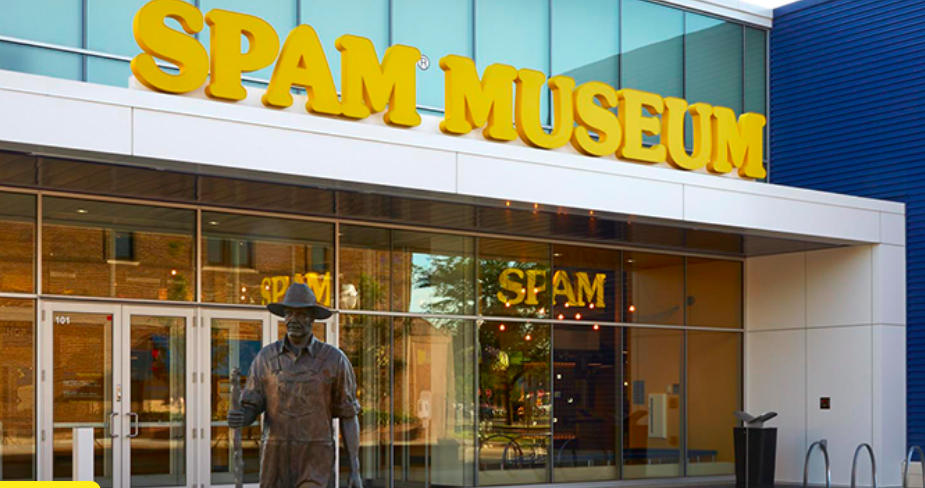 Staal said the best bit about making the ad is the legacy of the Spam Suit, which once retired, will live on forever in the Spam Museum.

“It’s such an iconic brand, so we love that we’ve been able to contribute a piece to its history — and yes, there is a Spam Museum in Austin, Minnesota,” he revealed.

Spam senior brand manager, Jaynee Dykes, told AdNews the goal of the Australian ad was to "break through the digital universe clutter in a fun and impactful way”. On the question if the ad could be even funnier or riskier, and how conservative do you need to be with tinned pork, she said Hormel takes the Spam brand very seriously, but that it doesn’t take itself too seriously.

“We have a super fun brand that has permission to be quirky and engaging and to have its own personality,” she said. “ We embrace that as much as possible, keeping in mind that we have a premium brand image to uphold. We are very proud of that.”

The biggest challenge for Dykes in the whole process was giving herself permission to allow the brand to be quirky and "out there" — a little further than the brand has ever gone before.

“The best part was watching the production unfold and just being so excited and proud of what the Spam brand accomplished in Australia,” she revealed.

Dykes said early feedback and indications show that Spam products continue to resonate well with men — younger men in particular — and it's "a product known and loved by many”.

Australia has always been a strong market for the Spam brand, Dykes revealed, and she's hopeful the success this campaign should bring will lead to more advertising locally. “The initial read has been positive, with an uplift of 8% so far, compared to the previous year’s average," Dykes explained. "A pleasing result! Like all things, price promotion and advertising are impactful together.