Sorrell: Takes aim at Google and Facebook, says there are no rebates in US and transparency is key 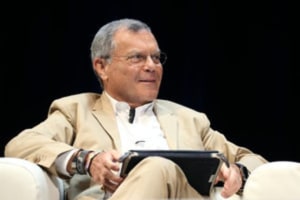 When asked by AdNews about the reputation issues GroupM faced in Australia following the misreporting of client results earlier this year, and the ongoing issues over rebates and kickbacks in the US that are affecting trust in media agencies, Sir Martin Sorrell was quick to reiterate that the Australian issue is contained to MediaCom. He added that it was "unacceptible" but had been handled.

“I don’t think its GroupM to be fair – it’s around MediaCom – let’s try and get some accuracy into the Australia press,” he quipped.

“You have to operate with transparency and be as open as [you can]. If you as responsible members of the press can get our competitors to publish their billings fees, revenue figures and net sales figures, that will be starts. I don’t feel I have to make any explanations about transparency because we are very transparent with those numbers – and other numbers.

“On the question of transparency, I’d make one other observation. People focus on agencies, but there is the issue of transparency elsewhere. You do not know how the Google algorithm works; you do not know how the Facebook algorithm works. In terms of profitability agencies make between 10 -16 % on net sales, last time I checked, Facebook and Google were making around 40 or 50% or closer to 90% on margin. But to go back to the question, it’s important to be transparent. If you make a mistake you correct it as quickly as possible.”

When asked separately about AVBs and rebates across Europe and the US, he said: “Rebates do not happen in the market. AVB’s, we saw that in France with the Loi Sapin, but the answer is that the market adjusts, agency remuneration adjusts if AVB’s are banned and fees and commissions establish a different balance.”

Loi Sapin was a law brought in in France in 1993 to bring more transparency to media buying. All invoices are sent to clients and rate cards published so that any differences are visible to all parties.

It also changed agencies ability to buy inventory in bulk and sell-on that inventory to different clients in chunks. Earlier this year it was expanded to include all media channels such as digital.