Sorrell’s S4 Capital is pursuing bigger acquisitions but not WPP 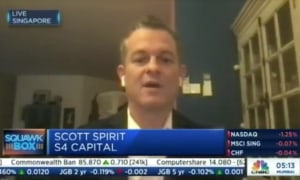 And there are more deals ahead but not, says Spirit, a tilt at WPP, the company founded by Sir Martin and the one he left two years ago to start pure-play digital group S4 Capital.

Last week the company announced the addition of Integrated agency Decoded Advertising, to be combined with content division MediaMonks, and Metric Theory, to go into programmatic and analytics agency MightyHive.

This week S4 announced the addition of TOMORROW, an award-winning Shanghai-based creative agency, which is merging with its content practice, MediaMonks.

“We've been busy spending that,” he told CNBC Asia in an interview.

“I had a busy Christmas .. we've announced three deals so far this year and certainly have a pipeline of more to come.

“We still have around 30 million pounds of that about 113 million we raised available. We're cash positive as a company right now so we could certainly raise debt to significantly increase that fire power.”

Before the capital raising, S4's deals were smaller and funded out of cash flow.

S4 Capital typically doesn’t release the commercial details on acquisitions but Spirit says the company has been paying between five and ten times EBITDA.

“We are seeing a lot more activity in the M&A (mergers and acquisitions) front in our industry more recently,” he says.

“I think that they're very valid competitors and very aggressive but the reality is we offer a very strategic route for these entrepreneurs to become part of S4 and continue building their companies."

Asked about the possibility of taking over WPP, Spirit was negative.

“Our industry is certainly not a stranger to rumours. I think for us, we're very focused on developing our S4 as a business.

“We're 100% focused on digital. So from that perspective, I don't think WPP would be the kind of target that we'd focus on given that given they have a very large traditional business.

“We're also very focused on organic growth and WPP hasn't grown for a couple of years. So again, probably wouldn't meet our criteria.”