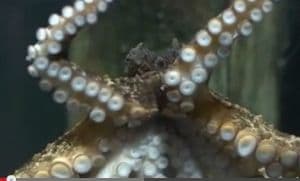 Sony New Zealand wanted to show that its latest camera was water-resistant, so it took the obvious step of training an octopus to use it, so it could take photos of the people who visited it in the aquarium.

Sony In partnership with FCB Auckland trained a female octopus named Rambo to take pictures with a camera in order to create a minute-long ad for the Sony Cyber Shot TX30.

Rambo's trainer, Mark Vette, told AdWeek that it took Rambo just three attempts to understand the process, though at times she behaved like an eight-armed diva, smashing several cameras to bits during a two-month training process.

Watch the video below – we promise you won't regret it.