'Sock’ it to Alan Jones 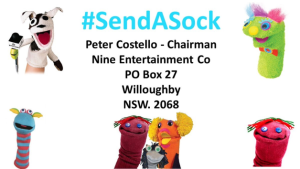 2GB’s Jones told his listeners that prime minister Scott Morrison should “shove a sock” down Ardern's throat over comments about climate change.

Jones called Ardern a "joke" for preaching about climate change.

The SG Oz Team have decided to #SendASock to the Chairman of Nine Entertainment Co.

Send us a snap of your sock being mailed and we will put you on the draw for an SG Oz cap.#Auspol pic.twitter.com/FoUk3ngEY2

Jones released a statement:
“I note some concern about my comment this morning re New Zealand PM Jacinda Ardern and her remarks and preaching about climate change.

“Of course what I meant to say was that Scott Morrison should tell Ms Ardern to “put a sock in it.”

“There are many people who would relish the opportunity to misinterpret things that I have said as we have seen online this afternoon. Of course I would not wish any harm to Jacinda Ardern.

“This wilful misinterpretation distracts from my point that she was wrong about climate change and wrong about Australia’s contribution to carbon dioxide levels.”